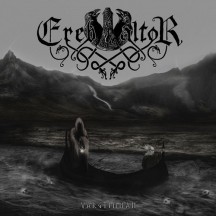 
Grab your leather-bound book of runes, and let's go camping in the mystical forest up north. It is pagan black metal time. Pagan veterans Ereb Altor return in style with their ninth studio album entitled Vargtimman (The Hour of the Wolf).

The foursome from Gefle, Sweden comes back with an inspired offering and a story of two halves. The first half of the album is dominantly in English and is mostly on the epic folk spectrum while the second half is dominantly in Swedish and is mostly pagan black in nature. Both halves have their strengths, but ultimately the second half is where the most interesting music resides.

The first three tracks have that "campfire in the wilderness" vibe, which is achieved through both the longing atmospheres and catchy choruses, built on a solid foundation of slower tempos. I also do love the prominence of the bass guitar in the mix. It gives tunes such as "I Have The Sky" and "Fenris" a true groovy quality that adds to those sing-along melodies. With its bombastic style and power riffs, "Rise Of The Destroyer" is a pivotal track on Vargtimman. It evokes the best Borknagar songs while "Alvablot" takes the tempo back down toward a more Vintersorg-like epic folkishness with great guitar work.

"Den Dighra Döden" marks the start of the second half and darker part of Vargtimman. It opens up with the sounds of crows and evolves into a tribal folk song of the best kind, which brings to mind Moonsorrow at their peak. My favourite song is "Ner I Mörkret", with its intense atmospheric black metal aura a la early Dimmu Borgir crafted through awesome keyboard work. There is a real sense of darkness here, which carries through the more subdued "Heimdals Horn" to wrap things up nicely.

Unlike on their previous album Järtecken, it is hard to appreciate Vargtimman by listening to only one specific track since it touches such a wide array of influences. That being said, Järtecken was perhaps a little more intense as a whole.

Their respect for Bathory is well documented - they did release an entire album of covers a few years back - and Ereb Altor keep that flame alive with the strength and diversity on display on Vargtimman. With its bleak artwork, varied musical content, plus the option to buy the 2CD edition that includes their Eldens Boning EP, you should look no further for some quality pagan black metal.

Written on 12.01.2022 by
Dream Taster
Bringing you reviews of quality music and interesting questions such as: