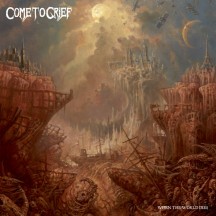 Sludge has become quite a versatile sound. For years we had sludge and stoner merged as categories in the Metal Storm Awards and there weren't much complaints. All sludge is also technically doom. Blackened sludge became almost a thing of its own. And you add "atmospheric" in front of it and it's suddenly post-metal. What at its core is a middleman between doom metal and hardcore punk has morphed in the decades since, and has permeated the DNA of other subgenres, and yet a very distilled version of it is still unmistakable. And a bunch of the bands that have started that, Down, Crowbar, Eyehategod, Melvins, all still kicking, still keep that distilled sludge as part of their sound. But there was more to 90s sludge than these bands. Now, a part of Grief's legacy has been awakened.

Come To Grief isn't really Grief. Though the band takes the name from the 1994 classic album of the same name, a name that also happens to include the original band name, only one of the current Come To Grief members also performed on the 1994 Come To Grief album. A lot of the ol' sludge royalty legitimacy comes from guitarist Terry Savastano, but drummer Chuck Conlon has also played on the final Grief record, so you have at least half of Come To Grief having been part of Grief. Because as much as I love sludge and especially this classic sound, I can't deny that I was mostly compelled to review this due to its connections to Grief.

And if you know how the classic sludge sound sounds like, and especially if you listened to Come To Grief (which you definitely should), you should have a pretty good idea of how When The World Dies sounds like. And even if all the sludge you listened to came from newer bands like Primitive Man and Thou, the lineage can be traced pretty clearly. Vocalist (and guitarist) Jonathan Hébert is the biggest surprise in the lineup, considering that he wasn't part of any other band I'm familiar with, and yet his corrosive voice is the vocal equivalent of broken glass shards, making Come To Grief sound a bit more in line with the newer sludge that Grief has influenced. And the vocals are not the only part that feels like old sludge rejuvenated by a feedback loop, with a lot of the slower tones finding a balance between crushing and groovy.

I can't necessarily find any drawbacks that I wouldn't raise to the entirety of the sludge genre, since this is pretty meat-and-potatoes, even with all its grooves and pace changes from slow to very slow. But as far as this sound is concerned, it found such a neat balance of old and new, amped up by Kurt Ballou's production and Jacob Bannon's guest vocal spots, condensing all the anger and misery in nearly 40 minutes.

Written on 28.05.2022 by
RaduP
Doesn't matter that much to me if you agree with me, as long as you checked the album out.
More reviews by RaduP ››