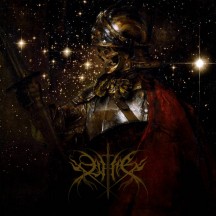 
This is one hymn you don't want to miss!

Do you like atmospheric black metal — the genre that can simultaneously chill you to the bone and catapult you into the vastness of the cosmos? Yes? Well, you're in luck, because today you have the pleasure of discovering Austrian one-man band Lune, named either after the moon (in French) or a blue river (in Tolkien's Noldorin language). Wait a second — Atmoblack? Austria? Tolkien? Doesn't all this remind you of a certain band called Summoning? Indeed, you'd be pretty accurate in making this comparison, but you wouldn't be seeing the full picture. Let me take you on a journey, deep into the Lunar Realm.

Our voyage starts at the "Lustrous Gates", and as a crashing wave of pummeling blast beats comes flooding in, one becomes witness to the chief masterclass of Lune: balancing opposing elements into a harmonic dichotomy. What do I mean by that? Well, this album excels at presenting contrasts — for instance, the cover art of a skeleton dressed in ancient Roman armor juxtaposed with the sci-fi backdrop of a brilliant star cluster. Or the sound of triumphant trumpets blaring, working in tandem with black metal's signature tremolo-picked guitar riffs. With the help of modern keyboard technology, Lune's anonymous composer M has the power to replicate an entire orchestra and demonstrate how akin metal and classical music truly are.

The most prominent and jarring disparity on the album, though, is clearly the interplay between the raspy, cacophonous lead vocals and the accompanying elegantly sung female choirs. Throughout the album, the tortured wails of a monstrous demon seem to battle with a legion of angelic voices. Now, these epic elements aren't simply tacked on as a gimmick. Instead, the usage of keyboards and choirs is deliberately chosen and crafted to allow an optimal flow of the music in all its variety.

Hymns to the Lunar Realm is divided into four songs, each between 9 and 10 minutes long. While the tracks don't drastically differ from one another, every song demonstrates diverse elements. We can take "Stardust Elysium" as an example. It kicks off with the aforementioned interplay of angelic choirs and anguished demonic cries. Soon after, a sombre melody takes center stage. After 2 minutes, an exquisite piano solo kicks in, supported by the grand sounds of brass instruments. The strained vocals return to overwhelm the piano playing, and blast beats crush the elegant music into ferocious black metal. At the six-minute-mark, the keys and trumpets resurface triumphantly, heralding a final transition to a two-minute-long section of ambience, giving the listener a moment's rest before the grand finale.

As the first tranquil notes of the concluding title track trickle in, my eyes turn to the cover art, peering past the grinning skeleton into the celestial depths beyond. Serene sounds lull me into a trancelike state, until — cymbals crash, guitars whine, and the demonic voice assaults my vulnerable soul. I'm thrust back into the aural storm. The angelic choirs return to battle the devilish voice as a sombre guitar solo commences. Finally, the title track reveals its last surprise with the sudden inclusion of numerous baritone voices at the five-minute-mark. With the resonating sound of ancient warriors, the deep male vocals overtake the wailing demon, proclaiming with powerful conviction:

In the darkest of times
There has always been the flame
Where is God, the sacred Lune?"


Throughout the album, Lune guide the listener on a grand voyage across the realm of stars. The fluid switches between beautiful choirs, intense pummeling, and musical tranquility leave the listener continuously entertained and anxious for the next transition, unaware of the long individual track lengths. As if the sounds of an entire orchestra were at their fingertips, Lune create an unforgettable opus of atmospheric black metal and one of the crown achievements of 2022.