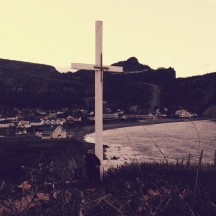 
01. The Patron Saint Of Whalewatching
02. To Die For The Ideal
03. She Sang Of Hyperborea
04. With Friends Like These


Maybe the real black metal is the friends we made along the way.

Black metal that is upbeat and positively emotional is not that new, especially since the blackgaze revolution of two decades ago (That long? Geez!), but there's been some more interesting recent developments on that. You've had very romantic and lovelorn one-man black metal albums in the likes of Gudsforladt's Friendship, Love And War or Këkht Aräkh's Night & Love. You've had pop-infused hyper-melodic black metal like Saidan's Jigoku or Spider God's Fly In The Trap. And I don't know how many dues to give Violet Cold and Mesarthim for bridging the gap. Where Great Cold Emptiness fit into all of this is a bit ambiguous, since they're a lot closer to the usual blackgaze sound that dominated the 2010s, but there is something fundamentally different about their sound that fills like it fits in this wave of hyper-melodic and hyper-friendly black metal, but the conceptual side of the album further grounds that.

Immaculate Hearts Will Triumph is the third part in Great Cold Emptiness's "Becoming A Man" trilogy. Black metal and it's folk counterpart always had a tight connection to place of its origin, sometimes to some sketchy extents. But the "home" in Great Cold Emptiness's music is less a soil of the ancestors to defend kind of deal and more of a Stand By Me memory of home, of the people of your youth, of a time when things felt simpler and the people warmer. That's probably not entirely what the band had in mind, as they do state that some of the inspiration of the album was a "trip" (in both sense) made at a place where their ancestors landed and feeling a connection to them, but then making the album centered around "forgiveness and companionship among friends" and "the triumph of the heart and overcoming the most difficult stages in a man's life: him finally leaving home" really settles the conceptual context for me.

And the music lives up to it. Not entirely as overtly atmospheric and crushing as the band's previous work, with the funeral doom side of their sound immensely diminished this time around. Instead the space is filled by some of the brightest blackgaze you'll hear this time. You can throw adjectives like "epic" and "triumphant" and "ethereal" to it, but there's an even stronger "lovelorn" and that type of emotion you feel when you're not exactly sober and you're overcome by the sudden feel of telling your friends how much they mean to you. And don't take my "not as atmospheric" comment to mislead you into thinking that Immaculate Hearts Will Triumph is not incredibly atmospheric. It is, and almost overwhelmingly so, but there's a much stronger emphasis on riffing and dynamic sections, and whatever than baffling genre change in the last song is. And maybe even weirder, and more fitting of my Stand By Me comment is how cinematic the entire thing ends up feeling.

If there's anything I really appreciate Great Cold Emptiness for, other than sounding similar to a great Katatonia album, is how easy they make it to emotionally connect to their music.

Written on 12.01.2023 by
RaduP
Doesn't matter that much to me if you agree with me, as long as you checked the album out.
More reviews by RaduP ››