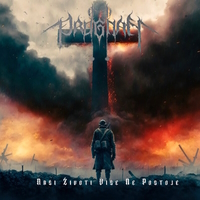 
Melodic black metal made by a guy who has composed music for Hollywood, and with great storytelling to boot? Tastefully symphonic, hard rocking, raw, ice cold yet epic? Yeah, sign me up. Naši Životi Više Ne Postoje (Our Lives No Longer Exist) is the debut LP by Croatian Prognan (Exiled), released a whopping 11 years after their EP Jama in 2012. With a core of repetitive, hard-chugging meloblack, epic yet grounded melodies, and real orchestral and choral arrangements on top, they somehow manage to sound like a missing link between raw, melodic black metal and a dramatic film soundtrack, and it is pretty glorious.

Welcome to Balkan. The year is 1914, and World War I has just begun. A soldier is dragged from his loving home and put through hell, and Prognan lets us follow on his journey through loss and longing, death and despair. Now I don’t speak Croatian and there is no official translation available, sadly, but from what I can tell, he is pulled from his wife and kids into a needless war, wounded and left alone in the middle of winter, and has to commit terrible atrocities in the name of a home he no longer knows whether it even exists.

”Jebeš ti život kad ostaneš sam (Fuck life when you remain all alone)
Ma sama misao dušu mi gnoji (The mere thought of it fills my soul with pus)
I jebem ti dom kad nemam tam' svog (And fuck home where there I have no one of my own)
Nudi se tuđe, ali miliji mi moji (Someone else’s is offered, but dearer is my own)”

(Thanks to Sand for the translation)

“28061914” opens up the album with a simple, effective chugging tremolo over blast beats, as the hoarse, rasping vocals tell the story of the war erupting in Sarajevo. It soon evolves into a Theogonia-era Rotting Christ groove complete with a folk-infused melodic guitar stick supported by a violin, and progresses into a hard-rocking finish complete with subtle female choirs behind the rhythmic blackened vocals. Well, are you excited yet? If not, I have either failed at my task or you do simply not like melodic black metal.

Militaristic drums introduce “Nepriljatelj Pred Vratima” (Enemy At The Door), which then evolves into a more mid-paced and symphonic affair than the opener, with the vocalist utilising some clean vocals to good effect before it finishes with a violin dirge supported by rhythm guitars and choirs. A classic, slightly folksy tremolo riff based on a simple two-chord progression drives much of the 9-minute long title track, and I start to realise the pattern by which Prognan compose songs; start out with a raw yet catchy black metal riff, add a groovy variation to it, then let it escalate into an orchestral finish. I’m not saying this predictability is in itself a bad thing, it’s just something I noticed. The biggest standout moment is the entirety of “Golgata” which with its comparatively short runtime, memorable riffs and choirs makes a big impression already before the trumpets arrive to turn the drama up even a notch further.

Naši Životi Više Ne Postoje is marred by its own ambition; with its one-hour runtime, it demands a lot of attention from the listener, and some tracks should probably have been left out or at least shortened. It tells a complete story and is meant to be listened to from start to finish, but I’m afraid my short attention span will turn this into an album to which I will listen partly when I’m in the mood, and rarely in its full length. However, it bears mentioning that I cannot really figure out which of these songs I would cut out; they’re all very good, there’s just a bit too much of the good for the good’s own good. It would have been to the album’s favour if the longer tracks, such as the title track and “Po Ovoj Zimi Nalazimo Smrt” (In This Winter We Find Death) had been shortened by a few minutes, because after these both and the gorgeous instrumental interlude “Spas” (Salvation), there’s still roughly 25 minutes of the album left to go.

What makes this album still work well is the way its symphonics are so tastefully integrated into the black metal core, in a way that never takes over the music. At first, I felt some trepidation; would this turn out into something way too over the top or cheesy? But no, the choirs and orchestra exist to support the black metal, rather than the other way around. They are not ubiquitous, as in certain (less beloved by me) truly symphonic black metal acts, but weave around a core of grounded, melodic tremolos, chunky riffs, and martial drumwork. Choirs, strings, folk instruments, and horns are used for dramatic effect rather than being the drama itself. Therefore, I would hesitate to call this symphonic black metal; rather, it is cinematic black metal, and the focus lies on the metal rather than the symphonics. Naši Životi Više Ne Postoje is glorious, and very enjoyable, there’s just a bit too much of it.