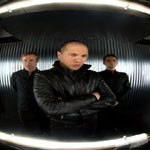 Check out below the trailer for a short film titled "The Ballad Of Danko Jones". The short film will be featured on the Canadian hard-rocker Danko Jones' upcoming new DVD called Bring On The Mountain: The Complete Visual History Of The Hardest-Working Band In Rock n' Roll. The DVD is set to be released on June 13th via Bad Taste Records. The trailer for the documentary to be featured on the DVD is also available for viewing here.

The two-disc DVD will contain: