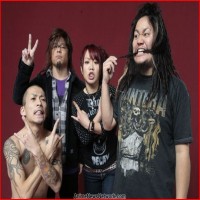 Maximum The Hormone is a band of contrasts: jovial pop-punk choruses and screeching, metallic verses; groovy, percussive beatdowns and free-spirited rock'n'roll sing-alongs; crude, colorful humor and periodic forays into a dark, desperate undercurrent. With a versatile, three-pronged vocal apparatus, an electrifying and outspoken rhythm section, and the songwriting expertise and attention to detail necessary to utilize the band's prodigious talents, Maximum The Hormone has evolved over the years so as to be unrecognizable from its original incarnation. Founded in 1998 by drummer Nao Kawakita and vocalist Daisuke Tsuda, Maximum The Hormone originated as merely a quirky hardcore punk band; it is in this guise that the band, rounded out by bassist Key and guitarist Sugi, released its debut, A.S.A. Crew. Shortly afterwards, the latter two members departed, to be replaced by bassist Futoshi Uehara and guitarist/clean vocalist Ryo Kawakita, Nao's younger brother. Under Ryo's aegis, the band evolved into an unpredictable behemoth characterized by chameleonic style shifts and uncommonly memorable songwriting. It would be safe to say that Maximum The Hormone is primarily known in the West for providing the opening and ending themes for the 2006 anime Death Note, namely "What's Up, People?!" and "Zetsubou Billy," both featured on the band's 2007 album Buiikikaesu, but there is a lot more to the band's career and signature style.

Maximum The Hormone has undergone an extraordinary evolution over its six-album career from a raw, amateurish hardcore band to a chaotic hurricane of rapid-fire screech-rapping, lethal slap- and double-bass combos, and ridiculously catchy pop-punk choruses. With a highly variable and instantly-recognizable sound, Maximum The Hormone is an icon of the Japanese heavy music scene. The band recently announced its return from another hiatus, during which Nao gave birth to her second child, and will hopefully enter the studio soon to record the follow-up to Yoshu Fukushu. In these last two albums, the band seems to have found its sweet spot; with any luck, the future will bring more success and more exciting avenues down which Maximum The Hormone can wildly careen in search of new ideas.