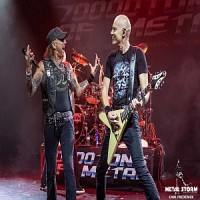 First band announcements have been made and it's time to book another trip to sunny Florida. Vacation mode on - scanning flight deals - 70000 Tons Of Metal 2020 here we come. 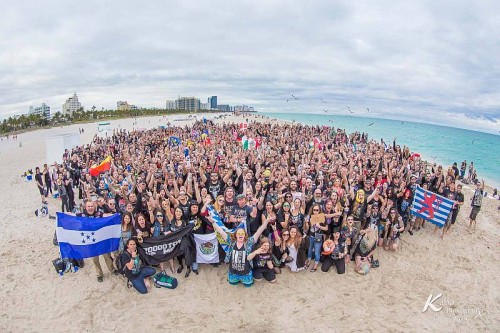 Per usual, our annual trip is fantastic from start to finish and I couldn't think of a better way to spend a week away from home during the bitter cold of the season. But before I reminisce about this year's 70000 Tons Of Metal cruise, here are some stats:

73 countries were represented during the 2019 sailing and the Top Ten Countries were: USA, Germany, Canada, Switzerland, Finland, Mexico, Sweden, The Netherlands, United Kingdom, and Colombia.

It's always fascinating to me that so many people from European Countries are making this annual trek since there are so many opportunities to see bands at tons of Festivals all throughout Europe. But then again, the 70000 Tons Of Metal cruise just happens to take place during the cold of winter (for most people) and that's maybe a huge draw to many.

But the 70000 Tons Of Metal experience is not just the cruise itself, it's also the cruiser organized activities happening days before sailing.

Even though the cruise departs from neighboring Fort Lauderdale, (and pre-parties are being held on Hollywood Beach as well) nothing can compare to the hustle and bustle of one of South Florida's premier vacation spots. For several years, the unofficial headquarters of all things pre-cruise has been the infamous Clevelander Hotel on Miami's South Beach. Events such as Metal Karaoke and Metal Trivia games were just some of the fun things to do while socializing with long lost or newly met metal warriors.

The "main event" aka Heavy Metal Beach Party, which is held the day before departure, was just as fun as in prior years. The (mostly) black metal shirts are taking over a spot on the Beach with music and partying until the sun goes down. It's a sight to see for sure.


check out the official pre-cruise parties video, courtesy of 70000TONS.TV


While we normally have a rental car to get from Miami to the cruise port in Fort Lauderdale, this year we opted to take advantage of the cruiser organized bus service. Not bad at all and since we decided to leave on one of the later buses, we arrived at the Port, went through security, checked in and were strolling along the Promenade Deck of the Independence Of The Seas in no time. Honestly, this was by FAR the shortest time it took us to go thru the check in procedures in all those years.

The ship, which has been the home of 70000 Tons Of Metal for a couple of years now, underwent some major renovations while in dry dock and I have to say they did a great job. Several outdoor activities were added to the ship with the waterslides being one of the main attractions for sure. I highlighted some of the improvements in a prior report (check here) but for me the best thing was the addition of the Playmakers Sports Bar; which also was the host for this year's nightly Karaoke. Great atmosphere, great bar tenders; all in all a great choice by Royal Caribbean to add this to the ship. 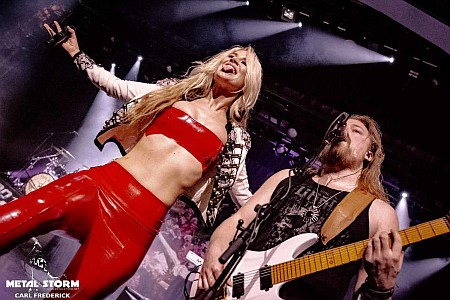 Delain rocking the Theater
The venues stayed pretty much the same, except some name changes. The Pyramid Lounge was now the Star Lounge and the Alhambra Theater turned into the Royal Theater. I have to admit that in prior years I was NOT a fan of the Lounge and usually avoided it unless a "must see" band played, but this year I found myself sitting in a comfy chair in the Lounge more often than I would have guessed. Hmmmm, maybe it was the comfy chairs.

I was actually reading my report from last year and while I criticized some of the "short comings" of the service or other stuff, I am glad to report that some things did change; for the better I might add.

- Pizza: while I am still not a fan of any of their pizza's, I found that the vegetarian one is really, really good. (while the others are still not up to par IMO)
- Coffee: apparently Royal Caribbean read my report since the quality of the coffee did improve. We actually snagged a carafe the first morning, told our steward to leave it, and filled it up each morning so we could enjoy some coffee on the balcony before getting ready for the day.


Alrighty folks, those who have read my prior reports on the 70000 Tons Of Metal cruises or those of you who have actually attended them, know how awesome they are. And just as in prior years, Carl Frederick of Blazing Metal Photography was the main photographer and did an amazing job. There really is no need to get into every little detail on every hour or any band for that matter. This year I will limit the report to highlight some of the greater moments while attending this unique festival. The cruise is still and will always be the Original, The World's Biggest Heavy Metal Cruise.

Since the running order for all 4 days was posted online a couple days ahead of sailing, I knew that I would miss some bands no matter what. Some were at the same time as "must see" bands or played at a ridiculous hour in the morning. What I didn't plan on was getting a slight cold the day before leaving, which of course sucked majorly and contributed to the "I missed such and such band" factor. Ugh.

Thankfully Carl was on top of his game and a beast when it came to tackling the ever so crowded photo-pits at the venues. Make sure you check out his galleries of the cruise. Hands down, dude is a machine. 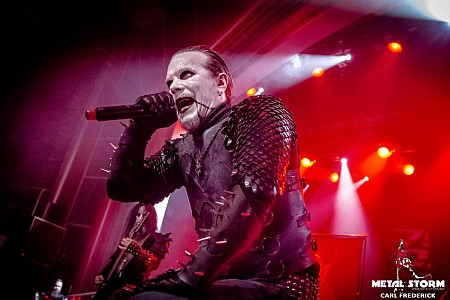 Dark Funeral in the Theater
So, first bands of the 2019 cruise were Mors Principium Est at Studio B and Dragony in the Star Lounge. Since I already had Mors penciled in to watch on Day 3 at the much bigger Pool Deck Stage, I sat my butt on a bar stool in the Star Lounge, still sipping on a cup of coffee, getting weird looks from the bartender when I told him "hey, can I have a shot of Crown Royal in my cup"

Dragony's vocalist Siegfried was already on the boat a couple years back with Visions Of Atlantis (which were also on board this year) and he joined us in 2018 as a "regular" cruiser; so it was nice seeing him again. And hearing him again as well. Dragony played a good set and the Lounge was actually pretty full. I made plans to watch at least some of their second set on the much bigger stage at Studio B, but since it collided with Sodom on the Pool Deck I wasn't sure about the whole plan.

Delain was playing in front of a full house in the Theater and I watched most of their set. It's always nice watching Charlotte & Co but I had them also tagged for Day 3 on the Pool Deck Stage. Onward to the fine dining room we went.

And speaking of dining; there sure was no lack of options. Beside the a-la-carte dining room there is the Windjammer Buffet, Sorrento's Pizza, and the Café Promenade; which all are included in the price of your ticket. For an additional fee you can also choose between 3 specialty restaurants (Italian, Steakhouse, Hibachi including Sushi), Playmakers Bar Food and Johnny Rockets. The Dining Room used to be open for breakfast and lunch but in recent years they only offer the dinner option. According to the Ship's Captain the aforementioned choices weren't utilized enough on 70000 Tons Of Metal and they scrapped them for our cruise.

To find out which eateries (and everything else on the ship) are open when, a daily "Cruise Compass" is put in your stateroom each night during turndown service. Kinda like a daily planner with all kinds of information such as ship wide special deals for the casino, photo packages, (non-music) activities, raffles, drink specials and so forth. The running order is listed as well and for Day 1 of the cruise went as follows: 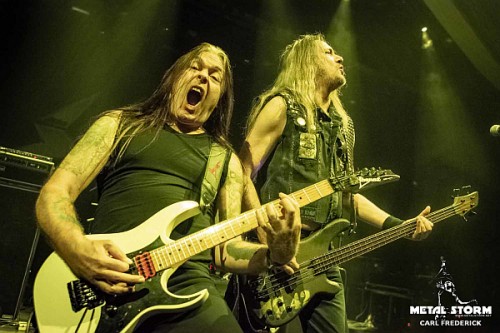 Tom and Frank united - Sodom
Did I miss some bands the first day? Yap. Bloodbath being one of them.

But since each and every band plays twice on 70000 Tons Of Metal it's just a matter of planning to make the most out of your concert experience. Of course hanging out with old and new friends or totally losing time while having some great conversations with folks will throw a wrench in any well thought-out plan. (I blame Warbringer's Kevill and his lovely wife for missing Dark Funeral

) Nah, they were awesome dinner companions on the first night.

And this is just one of the million perks on the cruise. You WILL run into musicians all the time, especially in the bars or eateries. In the formal dining room… well, formal as in shirt and shoes required

, unless you are a hermit and want to have your private table, the servers will sit you wherever there is space. Over the years we have sat and dined with tons of musicians and it's always a blast.

So, bands that blew me away on Day 1; and for those who know me, can already guess which band was my favorite… Sodom took it. Awesome to say the least

Now I have seen Tom and Co plenty of times over the years, but now it's a brand new band per se, with new members and some old returnees. Granted, I was a bit skeptical when Sodom announced their new line-up, especially since Tom stated: "I would like to start all over again with fresh and hungry musicians., and then he announced that Frank Blackfire is back in the fold.

But oh wow, Frank was on FIRE. Awesome performance by all. The Royal Theater was one hot mess during their set, mosh pits almost nonstop.

Another band, a new one for me since I haven't heard them before were Columbia's Perpetual Warfare. Blew me the fuck away. So good, so hungry, so much fun… in the much hated Lounge nevertheless. Awesome energy, sound was actually not that bad, but it could have been because I wasn't actually IN the room, but rather on a couch right outside. It sounded great. Yap, the stage is so darn low that if you are not right in the front your chances of seeing the band are slim to nothing. Since it was past 2 in the morning, sitting down while headbanging worked great nevertheless.

And speaking of the Lounge, earlier in the day I also watched Twilight Force and CyHra perform on the small ass stage; which makes it 4 bands in one Day for this venue. Shit, in prior years I managed to watch less than that during the entire cruise.

Ok, the third band I want to highlight for Day 1… ugh, it's actually a tie between Accept and The Black Dahlia Murder. Don't get me wrong, ze Germans always deliver, but I just saw them (still with Peter Baltes) a couple of months earlier on Metal Hammer Paradise Festival and stayed for only a couple of songs.

The Black Dahlia Murder on the other hand, I haven't seen in a while. And wow, did they deliver. Trevor was all over the place, per usual, and the audience had a great time as well. For those interested, someone recorded their entire set and you can watch it on YouTube clicking here.

TBDM was also the last band for me. I was gonna hang around to watch Exmortus but threw in the towel around 4 in the morning.

Watch for the next segments of "memories" and make sure you check out the awesome pictures by Carl as well as the below Day 1 Recap video by 70000TONS.TV