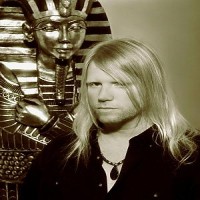 Last month, on the opening day of the Summer Slaughter tour no less, I had the pleasure of sitting down and talking to the main man from Nile himself: Karl Sanders. On a hot summer day in Fort Lauderdale, I was warmly invited aboard his tour bus for a lovely talk about the festival, band business, historical artificacts, and more.

Che: Greetings, Karl, and thank you for taking the time out for this interview with me today. How have things been going for you and the rest of Nile lately?

Karl: Fine, everything's been just fine. We had a nice little break after the last European tour, and we've been laying low since then, getting ready for Summer Slaughter.

Che: Very nice. I assume you're you're all pretty excited?

Karl: Well of course, I mean it's Summer Slaughter. Cannibal Corpse, Suffocation, Krisiun... come on! It's a great package!

Che: Of course. So what are the pros and cons for you of a more festival-like approach like this, as opposed to simply doing your own regular tour?

Karl: Well, there's some obvious pros to it. I mean, there are great other bands with friends we've known and respected for years, and we want to be part of that action. It's a great opportunity to have a lot of fun, and every location that we stop at on this tour, everybody in that city's going to be coming out. How do you miss this? If you're a metalhead, you're coming out to Summer Slaughter, goddamn it! As for the cons though, every day is just going to be one huge clusterfuck, between the logistics of getting one band after another up and off the stage. When you're in that much of a rush and you're a band with a lot of gear like we are, it gets very stressful. I mean, our drummer, George Kollias, he had to set up his drum kit in our trailer.

Che: Wow. Well, I'm sure the fun of the experience outweighs all of those more irritating aspects, no?

Che: So are you going to be doing any hanging around in the audience on this tour? Any bands you're particularly excited to watch?

Karl: Krisiun, for sure! Most brutal band on the planet.

Che: Sounds good. Now as far as activity on the Nile front is concerned, you all put out a new album last year, What Should Not Be Unearthed. How have people been responding to it?

Karl: I haven't heard too much slack on it. Sethu had a bit of a mixed reaction though, a lot of people seemed to complain about the sound on that album.

Che: Do you think fans are at times unrealistic in terms of the type of sounds they want to be hearing from you all?

Karl: Some can be unrealistic. But I've come to the conclusion that fans are not wrong. They're not wrong. Fans are right. Whatever stupid thing someone might think, they're not necessarily wrong, even if it's something outlandish and completley not based in reality. All opinions have validity. When it all comes down to personal preference, really who's to say who's right and who's wrong? It's all just interpretation.

Che: I also noticed on the latest album that you all had this "Call To Destruction" track. And lyrically, it appeared to lament the recent destruction of historical artifacts in the Middle East. To the best of my knowledge that's really the first time your lyrics have gone from ancient to more modern topics. What prompted that, and do you think it will continue?

Karl: Who's to say what will be written in the future? I don't know yet. I think though that it definitely has a relevance. All the ancient artifacts that archaelogists dig up and are still digging up, you know, in Egypt, Iraq, Syria, etc., it was all relevant to peoples' lives thousands of years ago. Something awesome happened, people built monuments, and in some way or another they got buried. And they just sat beneath layers of earth, waiting for people to rediscover them, they're pure and uncorrupted, almost sacrosanct in a way. They're on an eternal timeline, they meant something then and they still do now. We're not meant to fuck that up. Those are things that belong to all of humanity, no one has the right to tamper with or destroy them.

Che: I couldn't agree more. So when groups such as ISIS or other radical Islamists rampage through those regions and destroy these artifacts, do you think that in the long run that has a greater cost than the human death toll they've been racking up?

Karl: I think we should be careful in saying one is "better" or "worse" than the other, obviously innocent lives lost are never anything to celebrate. But it still is extremely damaging, the loss of all that history. Like I said, it belongs to humanity, those artifacts are precious and you can't just run down to KMART and get new ones. They remind us of who we are as a people and where we came from, and the loss of anything like that is very significant.

Che: Despite seeming to criticize Islamic ideology in "Call To Destruction," as someone who's very knowledgeable of Middle Eastern history, do you believe Islam has had its own value in the region as well?

Karl: There are somewhere around a billion Muslims in the world, so you can't say it doesn't have value. There were developments in sciences and mathematics during the reign of the Islamic caliphates that were good things. It's not necessarily all bad. But it just reminds me of when I once watched a documentary about all the good things that Hitler did. In the same sort of principle, we can't say "ok, this thing is alright," when it's not. It's a scourge upon humanity. Has it been meaningful to many people over the course of human history? Sure. But as with Christianity, there are some good things about it, but it's also been responsible for a lot of pain and misery. I think that the great Abrahamic religions are past their time, they're no longer appropriate for the way we live. The reason we've been having so many problems with them recently is because of those who attempt to still make them relevant when they no longer are.

Che: I'm curious, what really drew you towards ancient and Egyptian history in the first place? Was there any sort of defining moment for you?

Karl: There was a moment in the early days of the band, we had been calling ourselves Nile for a couple months. And I woke up one morning and thought to myself, "if I were a listener... what would I expect to hear from a band called Nile?" "What could you do with that name, what kind of concept could come from it?" And the rest is history.

Che: Very interesting! So the name came before the idea?

Karl: The name came from an ex-girlfriend of mine. When we first got started, we had a list with like 500 names, you know, like any young band, we had that period where we asked "what are we supposed to call ourselves?" And my girlfriend at the time, she kind of sarcastically said "well, you guys like playing that Middle Eastern stuff, why don't you call yourselves Nile?" And I thought hey, with that name it'd be easy to read a logo, probably very easy to remember... why not?

Che: "Why not"? indeed. Now I'm sure people ask you all the time, but would Nile ever play in Egypt?

Karl: We get offers to, but so far nothing has come of them. A lot aren't even legitimate, so who knows when or even if it'll happen?

Che: So what's next for Nile after Summer Slaughter?

Karl: We're going to tour with Overkill towards the end of the year, I'm really looking forward to that one. I imagine another album will be coming soon as well, but as for now there's no telling exactly when.

Che: Other than Nile, I'm also a big fan of your solo work that's in that more folky, ambient type delivery. Would there be any more of that coming anytime soon?

Karl: People keep asking for it, and I have opportunities to do more of it that are quite lucrative. I've just been very busy lately, and I had a neck injury a couple months back, so for now I've just been laying low, playing guitar, and trying to heal up. I'll probably get around to it.

Che: I'm greatly looking forward to it. Well, Karl, that's about all I have for you today, unless you have any last words for your fans over at Metal Storm?

Karl: We're happy to be on Summer Slaughter and can't wait to see all of our friends and fans. It's going to be a great time, and if the tour stops by you, come on out!

Thanks once again to Karl for taking the time out for the interview and being such a down to Earth, laid back guy. As expected, about 5 hours later Nile came onstage from their darkened shrines and annihilated the wicked. 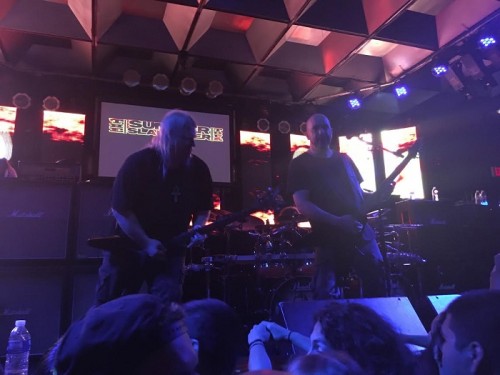 Posted on 07.08.2016 by
Apothecary
Comforting the disturbed and disturbing the comfortable since 2013.
More interviews by Apothecary ››