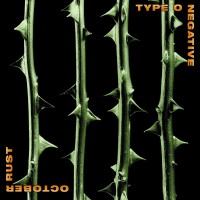 
01. Bad Ground
02. Intro (Untitled)
03. Love You To Death
04. Be My Druidess
05. Green Man
06. Red Water (Christmas Mourning)
07. My Girlfriend's Girlfriend
08. Die With Me
09. Burnt Flowers Fallen
10. In Praise Of Bacchus
11. Cinnamon Girl [Neil Young cover]
12. The Glorious Liberation Of The People's Technocratic Republic Of Vinnland By The Combined Forces Of The United Territories Of Europa
13. Wolf Moon (Including Zoanthropic Paranoia)
14. Haunted
15. Outro


Type O Negative in my opinion are one of the most overrated bands on earth. They manage to compose some really good songs per album, but the rest are either non-sense or not so inspired compositions to fill the album that make you get bored and most of the times not make it to the end of the album spitting curses here and there for the precious time you "lost".

1993's "Bloody Kisses" was their first big success, a good album but definitely overrated. 3 years later they had their second impact on the gothic metal scene with "October Rust", an album more accessible than its boring up to an extent predecessor. The compositions have a really calm approach and a fragile sound floating through the whole duration of the album is always noticeable and present. This doesn't mean though that the band won't have its more upbeat and groovy moments as well, such moments exist and make the album flow in a more interesting way. There's a sound harmony between the songs consisting of "October Rust" making the album flow as one, as much as you can bear it of course, because 72 minutes of gothic music that flows in the same way is exaggerating and not something good for the album.

The use of the piano and the keyboards/FX with their gentle and elegant sound is the strong part of the album along with the serene guitar chords, with those two elements harmonizing together in the most appropriate and beautiful way, evoking that tranquil and romantic atmosphere that is almost always present. But where do you think Type O Negative owe their guitar work and part of their sound aesthetic, to themselves? No, definitely not! The correct answer is to The Sisters of Mercy, incorporating at times a slight Black Sabbath touch. The rhythm section paces with the feeling of the album, being mainly accompanying, without being afraid to sound more imposing at times, with the drumming sounding powerful and the bass lines lending their pulses in an intense way. The atmosphere of "October Rust" is erotic/romantic and Pete Steele, with his charismatic voice, adds a lot to the overall aesthetic of the band, giving life to the poetic lyrics either in an intense or sensational way.

Well, I don't think I will change the opinion of people by saying that Type O Negative are overrated, they will always think of them as one of the best gothic metal or whatever acts ever, which is wrong in my opinion because there have always been greater acts in the scene. With all my generosity the biggest I can give to "October Rust" is 7.5, an interesting release with some really beautiful tunes and a devoutly haunting atmosphere which sadly tends to become boring from a moment and on.

Highlights: The atmospheric "Love You To Death", the groovy and danceable "My Girlfriend's Girlfriend", the really good and rolling cover version of "Cinnamon Girl" and the haunting and beautiful "Wolf Moon".

Written on 22.01.2006 by
KwonVerge
"It is myself I have never met, whose face is pasted on the underside of my mind."
More reviews by KwonVerge ››