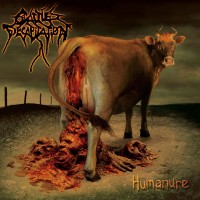 
Relatively new act, Cattle Decapitation has earned a big fan database in the US and in the whole world, this, their second release will prove the listeners that they're full of sheer brutality, and this time they're not joking around.

Well, as a matter of fact they could be joking here, let's take a look at the facts, the cover and album title are hilarious, and don't get me started with the song titles! Plain funny, reminded me of Grind legends Carcass, the final fact and the funnier of them all is that the members of Cattle Decapitation are vegetarians! Certainly life has a ironic way of putting things together.

Musically, Cattle Decapitation plays a mixture of Death Metal with Goregrind, plenty of blast beats, unrelentless riff usage and brutal vocals all the way, boring? It may be, but luckily this guys manage to keep their style fresh, maybe not to innovative, but once in a while is nice to listen this kind of acts.