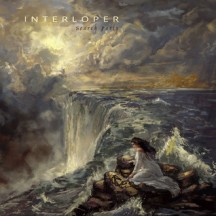 
As big a fan of djent as I am, sometimes it's nice to here a new band come along that's able to write djent-less prog-metalcore.

Now that's a nice combination of maligned metal genres isn't it: metalcore, prog and djent (the latter notable by its absence). I may not have sold the album to newcomers pulled in by the beautiful artwork with that first sentence, but it was my first thought when playing through the album. Another genre conspicuous by its absence is deathcore, considering that Interloper sees ex-Rings Of Saturn members Miles Baker (also of Ænimus) and Aaron Stechauner (once of Abiotic) joining forces with Vampire Squid vocalist/guitarist Andrew Virrueta; considering I just listed four deathcore bands that the band's members have past and present affiliations with, it's perhaps surprising that there's no hint of that style on Search Party. Instead, this is progressively inclined melodic metalcore, and well-played proggy metalcore at that, if not the most gripping interpretation of the style.

As with a couple of recent reviews (the Opprobre album in particular comes to mind), Search Party frustrates me in that it sounds intimately familiar, but I can't for the life of me pin down who the obvious comparison is. Instead, I find myself picking up on certain cues from an array of bands at different points in the album. The bands that came most to mind were Australian prog duo Teramaze and Voyager, the latter of which amusingly came through most strongly on the closing Duran Duran cover "Rio". Beyond them, I heard hints of Fallujah in some of the atmospheric guitar leads on the likes of "Bound To Fall", the chorus of "Drift" has something of Serenity to it, whilst the presence of melodeath in Interloper's sound came through on the likes of "Idle Years" and "Baring Teeth" with cues to Omnium Gatherum and Soilwork, respectively. An wide array of bands for what is ultimately a relatively conventional musical approach, it's not like Search Party is an avant-garde exhibition, but instead it feels like an album that's had a lot of wide-ranging yet overlapping ideas effectively infused into a cohesive core.

How does the music sound here? On the whole, you're looking at verse/chorus songs with big melodic choruses, riffs that frequently cross into mainstream metalcore chugging but with guitar work that is often ambitious and technical, regularly spitting out exciting leads, and a predominance of clean vocals (but with a healthy dose of screams scattered throughout). Some songs lean a bit towards melodeath or tech-death (see the opening of "Moonlight"), and there's also sufficient complexity in the time signatures and composition to plant Interloper firmly in prog territory, something that is curiously underlined by the prog-style keyboards that cameo in "Cheshire". In terms of tone, maybe this is just another example of me being easily impressionable when it comes to album artwork, but I find there to be a lightness to the music here, something that's helped by the preference for clean vocals on Search Party.

Everything I've written so far is a promising set-up, but what matters is how it translates into a final product. Personally, I was pretty underwhelmed on my first couple of listens, leaving me fully prepared to write a mediocre review. After a few more listens, I've definitely warmed to the album, with a few songs in particular standing out to me, such as the very classic-sounding but reliably memorable opener "Pathkeeper", the complex "Moonlight", the bright "Dreamlands" and "Idle Years"' melodeath inclinations. Additionally, there's songs that have peaks and troughs; I can't say the chorus to "Bound To Fall" does much for me, but I like some of the more delicate atmospheres to be found there, whilst the title track has a tendency to drag, but also has some pleasant Opeth-isms in some of the instrumentation. I would say that almost every song here has at least a part that I enjoy, although I would consider "Cheshire" and "The Wishing Well" to be lesser amongst equals. By saying 'almost' in the previous sentence, I am leaving room for myself to announce my lack of enthusiasm towards "Rio"; it's a reasonable cover, but it's still a cover of a song I am more than happy to not listen to more than once a decade, so I can't say I've enjoyed hearing it every time I've finished a playthrough of Search Party.

Overall, this is a solid debut from a collection of individuals branching out into altogether less extreme forms of metal than their previous bands and other projects have been based in. It has a bit of a tendency to drag at times, and I can see the vocals being a bit too clean for some people, but having been hooked in by the artwork, I've ultimately not been notably disappointed by the music; certainly, I'm intrigued to see where Interloper go next.

Written on 09.06.2021 by
musclassia
Hey chief let's talk why not
More reviews by musclassia ››