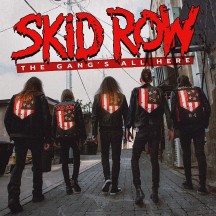 
Which gang? The Sugarhill Gang? The Ant Hill mob?

We all know the story by now: Skid Row were, for a while, one of the biggest rock bands on the planet, thanks to the combustible mix of riffmaster-in-general Snake Sabo and enigmatic and egomaniacal frontman Sebastian Bach. Said singer left the band and this chemistry was lost to time, leaving both groups to be less than the sum of their parts.

Though I was disappointed that no material from the SkidForce union with Z.P. Theart materialised, the chance to hear the first full-length album by the band in 16 years was an interesting proposition. And so here it is, the debut of the new face behind the microphone, erstwhile H.E.A.T frontman Erik Grönwall, and the culmination of a level of anticipation I've not seen for a Skid Row album in years.

Well, The Gang's All Here is certainly the strongest effort from the band in years (though that isn't exactly a hard feat) and one that reannounces the band's return to the studio with a bang. The combination of Grönwall's presence and some of the best riffs from Sabo makes for a powerful and electrifying mix that has sparks flying.

From the off, the band keeps one foot on the pedal while the other taps away on the floor. Much of the album keeps the tempo and energy high while hitting all the right notes for a hard rock album. The title track, "Resurrected", "When The Light's Come On", and "Not Dead Yet" remind you of the glory days of rock music, with the last tracks perhaps the musical answer to Gene Simmons's assertion that the genre is in its death throes.

While Grönwall and Sabo take the spotlight on the album, they are supported by the rest of the ahem, "gang", with Bolan, Hill, and Hammersmith rounding out the sound in style. Hammersmith's drums in particular are powerful and propel the album with precision strikes while Sabo and Hill hark back to their glory days with some excellent guitar interplay throughout the album.

The biggest shortcoming on The Gang's All Here is that the chorus is often the weak part of the song, leaving you shrugging instead of throwing the horns and singing along at the centrepiece. Take "Resurrected" as an example: a solid riff and performance by the band, but the chorus is perhaps the weakest point of the track, which is a big shortcoming given the band's aim of writing anthemic tracks.

The other issue is the inclusion of tracks "Time Bomb" and "October's Song"; the latter aspires to be a ballad-come-hard-hitting track that long overstays its welcome at seven minutes long, while the former fails to hit the hammer on the head as a track that masters the quiet/loud dynamic. While the band has previously shown it can handle slow and powerful tracks in the past, the inclusion of the tracks on The Gang's All Here feels like force of habit rather than an inspired inclusion.

With The Gang's All Here, one of the contenders for surprise act of the year is likely to be Skid Row. An unexpected reversal of fortunes, the album proves to be a hard-hitting return that is easily their best since their glory years in the late '80s and early '90s.

Written on 21.10.2022 by
omne metallum
Just because I don't care doesn't mean I'm not listening.
More reviews by omne metallum ››