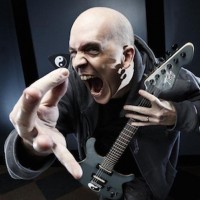 Devin Townsend entered the 2000s at the top of his game, with two career-bests under his belt already and many more career-bests yet to come. His work both with Strapping Young Lad and under his own name had begun to garner acclaim within the metal community, and his creative energy seemed endless. Unfortunately, Devin's struggles with his mental health and self-destructive habits eventually took their toll; the increasingly unhealthy atmosphere surrounding his Strapping Young Lad material, fueled by the negative side of his bipolar disorder, led him to retire the project in 2007, and in the same year he stepped back from creating music altogether. For two years, from 2007 to 2009, Devin embarked on a detoxifying hiatus; he quit smoking, drinking, and what he characterized as a host of other addictions plaguing him. He returned to taking his medication, dedicated more time to his family, and worked behind the scenes as a producer to relieve the pressure of constant touring and recording. After a sufficient absence, he began to write prolifically again, and when in 2009 he returned to releasing music actively it was with the first stage of his new Devin Townsend Project concept: a series of four albums, each with its own distinct sound borne of his musical rehabilitation, to be released in pairs. Though Strapping Young Lad remained mothballed (and, for the most part, still does), with Devin avoiding the material out of concern for its emotional toll, the Project project proved a great success and welcomed a healthier Devin back to the forefront of the metal scene.

The 2000s were when Devin really got to work, capitalizing on the musical and personal discoveries he had made on his first albums. His output during this decade demonstrates a singular capacity for extremes: volume, emotion, productivity, precision, and, of course, variety. Picking up extreme metal street cred (Alien, SYL) and total weird-guy prog street cred (Ziltoid) and even some sparks of crossover success (Addicted), Devin produced such a variegated bevy of material during this time that almost anyone could find at least one album to love and one to be challenged by. The 2000s were also a tumultuous decade, during which Devin experienced many personal trials and setbacks, ultimately having to set aside one of his best-liked endeavors, but he persevered - the guy took a two-year hiatus and still released 12 albums before the decade was through. He had already produced a handful of masterworks, but it's Devin's ability to evolve in sound, style, and philosophy - demonstrated to great effect in his output here - that makes him such a charismatic and enigmatic figure. And while the Devin Townsend Project concept would eventually find itself at odds with that capricious nature of his, its initial tetralogy was bringing him to a whole new audience.