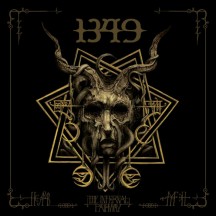 
Just when you thought the "Tunnel of Set" had reached its final conclusion, 1349 return with yet another offering of interlude-laced black metal. This time, however, the novella-like structure has been replaced by one that resembles an actual album.

As with all bands that continue creating new material after releasing their fan-ascribed magnum opus, it needs to be said that this album is not a return to "glory" nor is it an attempt at doing so. It shouldn't need to be stated at this point in 1349's career, but it's become common practice if only to fend off longtime fans expecting a full-blown carbon copy of the Hellfire days. The Infernal Pathway doesn't try to be anything other than what it is: a solid, if contrived, thrash-tinged black metal release. Nothing you haven't already heard before from the likes of Immortal, Taake, or Arckanum, but sometimes more of the same is exactly what people need. If only more of the same from 1349 meant reaching the same heights as any of those previously mentioned.

For anyone familiar with this longstanding quartet, you know exactly what to expect: technically proficient black metal played at blistering speeds supported by Frost's trademark chaotic precision and Archaon's near-impressionistic Kirk Hammett moments, scarce as they are. These guys rip and bang and shred and annihilate everything in their path as has been their modus operandi for their entire existence*, but they didn't forget to infuse their concoction with some spicy melodies (such as opening track "Abyssos Antithesis") and straight up rockin' grooves ("Striding the Chasm"). The latter seems out of place in this context, but these ears are open to partaking in that thing people call "fun" once or twice a year, and you can almost hear the smiles on these guys while they jam out and rip faces with another throwback guitar solo.

Another continued deviation from their earliest memories being hyped as the next big thing in the black metal scene is the production quality. Ravn's unique hellhound snarl and raspy growls are given just the right amount of complementary reverb to blend in seamlessly with the rest of the band, whose instruments really pack a punch. The bass gets lost at times in the mix but it's an insignificant blemish on the otherwise excellent post-recording side of things. If only more songs stuck out from each other and they dropped these completely unnecessary and disruptive interludes, all that fine work in the studio would have garnered more attention from metal fans across the spectrum. Unfortunately, since 1349 still seem to struggle with writing more consistently varied or immersive material, this project -- and album -- will ultimately remain on the outside looking in as longstanding and upcoming challengers look to take their place on the ladder. There's gold somewhere in all those talented fingers. It's just a matter of pointing in the right direction.