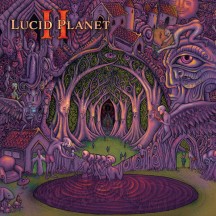 
The clear breakout hit of the 2020 Metal Storm Awards, what's the deal with Lucid Planet II?

It was a herculean rise for Lucid Planet; it was fitting that they won Biggest Surprise alongside Best Progressive Metal Album and Best Album Artwork, considering the band didn't even have a profile on the site at the beginning of 2021. Their inclusion in the awards was likely the first introduction of many users here to the Australian trio; I had encountered the group previously, as I recognized the artwork of their self-titled debut when visiting their Bandcamp page, but as I couldn't really remember how it sounded, it clearly didn't make as big an impression as Lucid Planet II did on both myself and clearly many others. In truth, 'progressive metal' doesn't really do this record justice; not only does the album operate in that same nebulous area between metal and heavy rock that groups such as Riverside do, but they bring a whole array of different influences into their sound as well.

Lucid Planet II begins in a relatively straightforward manner, knowing what's to come later; "Anamnesis" certainly isn't to be trifled with, a 12-minute prog/alt-metal slow burn with evocative vocals, muscular off-kilter riffs and a dense atmosphere, but at least comparisons to established metal bands such as Tool come naturally. Those comparisons to Tool come not only from the lengthy, meandering structure of the song, but also the key role the bass plays, as well as the varied percussive styles employed, both of which send my mind to certain tracks from Fear Inoculum. "Anamnesis" is quite a wonderful opener to Lucid Planet II, but it's more where the record goes next that really differentiates the band.

"Entrancement" is neither prog nor metal; it's a shamanic psychedelic ritual of a track, between the repeating percussive beat, contrast between the chanting male vocals and ethereal female vocals, and array of non-standard instruments that are woven in and out of the track. "Entrancement" is a fitting name for this track, but it's the next song on the album where the 'trance' really comes into play; the combination of metal and World music early on in "Organic Hard Drive" eventually transitions into a deftly incorporated psytrance break. It's a striking change of tone, but Lucid Planet do a good enough job of building towards it that it doesn't feel unnatural. They also do a great job of interweaving the electronics and metal to retain a connection with the rest of the album's sound, with some heavy chugs and exciting lead guitar work incorporated into this segment as it develops and morphs.

From "Organic Hard Drive", Lucid Planet II continuous to shift in tone and approach, whether it's the mellow acoustic ditty/reggae hybrid "Offer", dub-heavy "Digital Ritual" or enchanting oriental guitars in "Face The Sun". Nevertheless, the album is first and foremost a prog rock/metal album, and the lengthy trio of "On The Way", "Face The Sun" and "Zenith" offer plenty to get stuck into on that front; "Face The Sun" wonderfully meshes heavier instrumentation with the oriental music, "On The Way" nicely fluctuates between bruising riffs and atmospheric downtime, and "Zenith" rounds off the album with a gripping, tense build-up in its closing minutes. As much as the ease with which they shift into different non-metal sounds helps Lucid Planet II stand out from the band's peers, they back that up by having a really strong heavy prog base onto which these other ideas are added.

With albums that are described as 'eclectic', there's always a risk that the attempts to incorporate a wide array of styles will result in a final product that sounds scattered and lacking in cohesion, particularly when there's certain approaches that are only incorporated for one song (the shaman vibes of "Entrancement") or segment (the psytrance in "Organic Hard Drive"). However, whilst I've seen comments along these lines regarding this album and can understand those viewpoints, it's not something that ever comes to mind when I listen to Lucid Planet II; I think it's partially helped by the overall tone of the record feeling consistently relaxed and gentle, meaning that the breaks from metal don't result in a huge shift in tone, but I also feel that the band do a really good job at pacing the album and the transitions between styles such that the departures don't end up feeling out of place.

I've thoroughly enjoyed Lucid Planet II across my numerous listens of it; the record is a lengthy one, but between the variety in styles and well-judged ebb and flow of heavier and softer moments, it's a very easy album to listen to, and it's a highly rewarding one to boot. I do enjoy the longer, heavier tracks the most (particularly "Anamnesis", "Face The Sun" and "Zenith"), but the shorter trio of tracks contribute greatly to the album with their flirtations with different genres, and help make Lucid Planet II so strong as a complete listening experience.

Written on 04.04.2021 by
musclassia
Hey chief let's talk why not
More reviews by musclassia ››