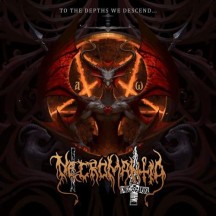 
To The Depths We Descend… is Necromantia’s farewell album and a tribute to founding member and bassist Baron Blood, who passed away in November 2019.

I have mentioned Necromantia on many occasions in this website and I consider them to be one of the most innovative black metal outfits of the ‘90s, simply because they did things back then that no one else was doing, including the use of two basses. This is the first time Necromantia use rhythm guitars again since their promo tape back in 1990 because, according to The Magus, “the use of the 8-string bass belongs to Baron Blood and it will remain with him”.

To The Depths We Descend… was supposed to be an EP but ended up being released as a full-length featuring six new songs and two re-recorded ones. The final two tracks are interesting to listen to after so many years, being obviously ‘beefed up’ due to the presence of guitars and a modern production. However, I have to say that what really impressed me was how the six new ones proudly bear the name and the ethos of Necromantia in 2021, without feeling dated. This is black metal the Greek way, not how the others play it, but injected with thrash, doom, and heavy metal. The sound and production are fresh but the atmosphere of mesmerizing mysticism, the layers of bewitching synths, and the primeval songwriting style of ageless black magic worship hearkens back to the days of the Storm Studios (the place where every black metal band in Greece recorded in the early years).

From the raging and more contemporary-sounding “Daemonocentric” to the esoteric title track that finishes the album, as far as the new songs are concerned, this is purely Necromantia. If you find the saxophone of the title track to be unbelonging or hipsterish, well, it’s not; the band used instruments like this long before it was cool and both Crossing The Fiery Path and Scarlet Evil Witching Black provided the blueprint for the sound of many symphonic black metal bands that are hugely popular today. Anyway, short rant over, back to Necromantia: I was a bit sceptical in the beginning with the line-up because all three members were also part of Yoth Iria’s debut, so I was afraid that we would have two albums sounding the same, but this is not the case at all. The similarities are there, of course, but As The Flame Withers and To The Depths We Descend… are two different beasts; it can be heard that the former was made by Mutilator and the latter by The Magus. Every song on here is special in its own way, but my personal pick is “As The Shadows Wept”; it is a song for Baron Blood and it really stands out both as a composition, as well as due to the emotional weight it carries.

This release marks the end of Necromantia and what a way that is to say goodbye to the fans and to honour the memory of a friend and bandmate. Baron Blood would have approved of this, no doubt. He is definitely part of it in spirit form, anyway.