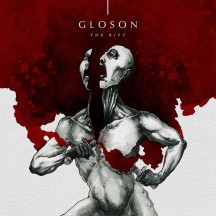 
“The Rift … is a hexalogy of songs inspired by humanity in its worst and purest form, a meditation through cruelty … an attempt to pursue the meaning of it all and foreshadow our demise through it.” With a description like that, you’ll be amazed to find out that this album is bleak and miserable.

Gloson have been slowly and steadily making their way into the world since forming nearly a decade ago. 2017’s debut full-length Grimen was sandwiched between two quality EPs, 2014’s Yearwalker and the two-song Mara from 2019, and they’ve not rushed into producing The Rift, only their second full-length record. Those long gaps have given the Swedes plenty of time to ponder how to convert their feelings of misanthropy, as articulated in the quote I paraphrased at the beginning of this review, into dark, grim music, with the result a bludgeoning, bleak form of post-metal.

With that hexalogy of songs running for nearly an hour, these are some long songs, with four of them running for 9 minutes or longer. However, across that hour of music, the tempo remains rigidly stable throughout; this is a relentless mid-tempo trudge of a record. With a thick, low-end sludgy weight to the gnarly heavy chugs, measured and hefty percussion driving tracks forwards, and fiery harsh vocals, the core of Gloson very much falls in line with what comes to mind when hearing ‘sludge metal’ and ‘post-metal’ used as genre tags for a record. As the group come from Sweden, some minds may drift towards Cult Of Luna, and between the use of percussion (such as the tambourine sounds during the quiet midsection of “Stygian And Aberrant”) and the nature of some of the heavier sections (I can hear parallels between the closing section of “Impetus” and the main riff of Cult Of Luna’s “Echoes”), the is certainly a degree of 2000s Cult Of Luna in The Rift. However, in general, the sound here is bleaker and more oppressive; it’s the kind of sound that feels intimately familiar without necessarily bringing any one particular band to mind, although of all the post-metal groups I’ve covered for this site, Wren is perhaps the most natural comparison.

The first four songs offer a rewarding mix of intensity and restrained levity. The grim, trudging base of “Stygian And Aberrant” is given a glimmer of melody with a higher-pitched guitar line layered on top, and the some pulls back to varying degrees at different points during the song, with the drum-oriented mid-section lending the track an eeriness. The drums play a big role in helping sections of the songs stand out, with thick toms giving a marching feel to moments in “Windbearer” and more energetic fills occasionally popping up from time to time. As much as the music is oriented towards darkness and heaviness, there are degrees of melody or lightness that pop up, with even some gloomy clean vocals being used on “Impetus”.

These first four songs are very satisfying and well-paced. However, given the length of the album, it would have limited its impact if nothing diverged from the formula across its runtime. Gloson must’ve predicted that thoughts would drift in this direction around the halfway point of the album, as The Rift goes to a next level in the last two songs. Certainly the standout cut from the record is “Cerberus IV (Exodus)”; it eases its way into itself with a memorable opening motif, a motif that is the central element of the first third of the song. From there, it gradually evolves before culminating into an engrossing climax, where evocative guitars clash with a winding synth line, a novelty for the album and one that works quite tremendously here. “Ultraviolet” takes a different approach, reveling in quieter settings more so than any other track on the album and slowly working its way towards a moody climax in which those clean vocals make a return. This song is the one that feels closest to the work of their compatriots in Cult Of Luna, and in combination with “Cerberus IV (Exodus)”, it makes for an excellent conclusion to the album.

An album that establishes a strong template of what to expect from Gloson in the first few songs, only to move away from that template for the last two tracks and become even better as a result, The Rift shows that Gloson have been making good use of the years since their debut. Given the mission statement set out by the band of this album representing the evil and cruelty of humanity, it’s perhaps ironic that the standout moments are the more melodically inclined ones, but this is a powerfully dark and bleak record.

Written on 20.03.2022 by
musclassia
Hey chief let's talk why not
More reviews by musclassia ››