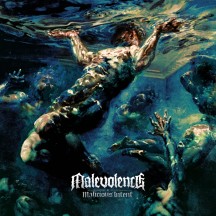 
He's not vicious or malicious, just de-lovely and delicious.

Breakdown-heavy hardcore mob Malevolence have been gaining momentum in the last few years, taking scalps and adding notches to their belts. Returning with their third album Malicious Intent, the group pour fuel on the flames they have been stoking in recent years, turning a beacon of potential into an inferno of hardcore power that shall raze much of the competition in their wake.

Hyperbole much? Well, it’s rare that an album retains the same jawdropping effect it has you from first listen through several repeated listens, with subsequent relistens not dulling the band’s cutting edge as is sadly often the case. From start to finish, Malevolence bring their metallic hardcore to bear on listeners with ten tracks of solid enjoyment.
Malicious Intent has plenty going for it, from the killer riff of “On Broken Glass” to the highly enjoyable payoff to “Do Or Die”. While the band largely stick to their lane, they do swerve into other lanes without easing off on the accelerator; “Higher Place” is a slower song with a killer solo and is a good example of a slower hardcore song that is not reliant on tempo for power, while “Salvation” has a soaring Killswitch Engage-esque chorus.

While the band do flirt with the ‘roar-roar, shouty-shouty’ style of hardcore, there is enough variation on tracks like “Armageddon” (though I do have to admit I find the OTT dramatic vocals in the verses make me laugh) to prevent this album falling into stereotype. Thorpe’s drums throughout tracks like the aforementioned “Armageddon” and on other songs like “Karma” give the album a groove that adds different dimensions to proceedings without forsaking power or overcomplicating proceedings.

The guitar tandem of Baines and Hall is perhaps what gives this album a lot of its character, bringing killer riffs that meld metallic groove with hardcore intensity without either sounding like the weaker of the tandem. While the vocalist is the weak link here, he isn’t bad by any stretch of the imagination; it’s just that he is very one-dimensional in comparison to the rest of the band, who stretch themselves throughout the album.

Yes, admittedly Malicious Intent doesn’t reinvent the wheel (or the breakdown), leaving those listeners who are not, well, hardcore, hardcore listeners (Nobel prize for literature here I come) unable to dig underneath the surface value of the music and enjoy the merits of this album. The poor utilisation of the guest appearances of Matt Honeycutt (of Kublai Khan Tx fame) and Matt Heafy (of Ibaraki... oh, alright, and Trivium too) means that they aren’t enough to scratch the surface and feel like a missed opportunity to break through with listeners who aren’t already bowled over by the band.

Malevolence have delivered a record that not only lives up to the hype, it further stokes the flames higher and exceeds it by a solid margin. For those of you who have yet to hear what the band have to offer, then Malicious Intent is certainly a solid place to jump in: certainly an album to keep an eye out for come the end of year lists.

Written on 31.05.2022 by
omne metallum
Just because I don't care doesn't mean I'm not listening.
More reviews by omne metallum ››