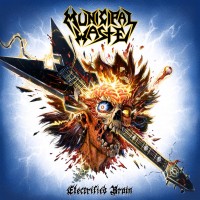 Municipal Waste have since long established themselves as one of the leading band’s in the thrash revival scene; marking their spot with a mixture of beer cans, bongs and simple but mosh ready riffs. While the band have hit somewhat of a lull in recent years, with new releases drying up like an empty keg at a party; the few drops left producing mostly foam rather than hearty beer, Electrified Brain sees the beer taps flowing once again and the music system pumped back up to 11 as the party returns in full swing.

While Municipal Waste have never produced the most complex music, there is a deceptive quality in their sound that makes some songs instant hits and others less so. “Grave Dive”, “Restless And Wicked”, and “Crank The Heat” are fun, more mid-paced tracks that will get you bopping your head along subconsciously with a beer in hand (just be careful not to spill!) while “Thermonuclear Protection” and “Ten Cent Beer Night” are an undiluted brew of riffs, groove and flat-out speed.

While the band blitz through the album’s 14 tracks as if the bell has rung for last orders, they manage to make memorable moments in the blur at the end of a night’s beers. Thought the aforementioned tracks are certainly strong on their own merits, like a crate of beer, they’re far more inebriating and potent when consumed all together in one sitting rather than taking one can/song out and returning to the rest at a later date.

The band sound much more vibrant and lively than they did on Slime And Punishment, with each member sounding inspired, rather than tired and going through the motions somewhat. Wase and Poulos up their game in particular, letting their riffs and solos spill all over the place like a pint glass overflowing. Foresta in particular benefits from the album’s brighter and more powerful production, his voice sounding stronger than it did the last time around; though not without their faults, they’re one of the most immediate improvements.

Those who find the band’s brand of crossover thrash not to their liking are unlikely to have any significant change of opinion with Electrified Brain, perhaps being better served by picking another drink that is available on tap instead. Though the band do tinker at the fringes, some experiments are more successful than others; “Blood Vessel/Boat Jail” throws back to 2019’s The Last Rager but doesn’t take the right lessons from that EP; instead creating a track that is lacklustre in its build up and disappointing in its pay off.

While Foresta’s vocals are one of the improvements made on this record, he still remains the lightweight in the group of seasoned drinkers, with his shouted delivery feeling limited and monotonous after a while. The lack of variation does hinder regular replays of the album, leaving the replay value to get flatter with each re-run; leaving listeners with a crisp golden ale that goes flat far too quickly.

Electrified Brain is like stumbling across a craft beer after a session of generic beers for the last few rounds at the bar; it's fundamentally the same drink, but it is one with a taste you can savour and enjoy far more, while remembering it long after the night has descended into a haze of drunken conversations and a wobbly walk home after stopping off at the local kebab shop.

Written on 19.07.2022 by
omne metallum
Just because I don't care doesn't mean I'm not listening.
More reviews by omne metallum ››