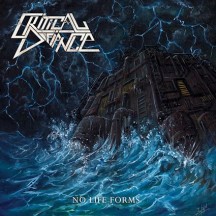 
A critic takes a critical look at Critical Defiance.

Coming to my attention way back in 2019 with a strong showing out of the gates with debut album Misconception, Chile’s Critical Defiance face the daunting task of making an equal or greater impression the second time around. No Life Forms is an energetic and frantic follow up that will likely tick a lot of boxes for thrash fanatics and those wanting a dose of straight-up fast, energetic metal.

Crushing the accelerator underfoot from start to finish, Critical Defiance produce the kind of sonic blitzkrieg that will get your adrenaline flowing and your body moshing. The metallic attack of old school thrash mixed with the sonic anarchy that is highly reminiscent of grindcore. No Life Forms is raw, unfiltered aggression. “The Last Crusaders… Bringers Of Death!” is an early high point of the record, crashing into life and youthful exuberance. The decision to give Arevalo’s bass and Poblete’s powerhouse drumming equal prominence with the guitar’s, give tracks like “Altering The Senses” their charm and an added dimension. However, the highlight is when all these elements combine and are given centre stage on the instrumental “Elephant”, which is a titanic, powerful track.

With a loose production, No Life Forms thrives in the noise and chaos that songs like “Dying Breath” have at their disposal. Managing to balance such rawness without sounding like Napalm Death stuck down a well, is a balance that is hard to strike, but one that pays off big time when It is done right, such as on the title track.

Alvardo’s vocal style however is in the vain of Slayer’s Araya, that is, barked lyrics with intensity and forgoing much melody. When done right, as it is in Slayer, it is an effective vocal style; Alvardo however, doesn’t have the same charm as his would be inspiration has (though he does have the passion at the very least). No Life Forms does fall off on the album’s second half, as the immediate adrenaline rush from the start of the album wears off; the band’s shortcomings are more pronounced and noticeable.

While tracks like “Kill Them With Kindness” do experiment and try to refresh the somewhat stale style of the album thus far, it does hint at the band’s current limitations beyond their current boundaries. The mid-album high point of “Elephant” proves to be the dividing line, with the subsequent four tracks dropping off in quality compared to the first half. The closing title track however ensures that those who stick it out are rewarded with a strong end to the album.

No Life Forms is likely to fall flat for those who are looking for a new twist or take on metal, as the album indulges itself and listeners in unabashed old school thrash metal worship. For those who like their music fast and loud, Critical Defiance stick close to the recipe for better or worse; good if not particularly memorable mosh fuel for those who want a straight-up direct dose of metal.

Written on 19.07.2022 by
omne metallum
Just because I don't care doesn't mean I'm not listening.
More reviews by omne metallum ››