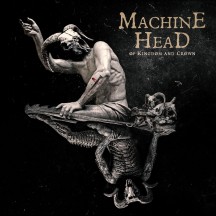 If there's a band who are no strangers to crashing and burning before rising like a phoenix from the flames, then Machine Head is that band. Having emerged, like a drunk with a nu metal hangover, from the wreckage of Supercharger back to the forefront of metal pack with The Blackening, the band once again wiped out and wrecked their credibility (to the barely stifled laughs of the metal community) with Catharsis. The question now is, can lightning strike twice and Machine Head resurrect their fortunes again with Of Kingdom And Crown?

Rome wasn't built in a day; neither was Machine Head's prior rebuild, with the epoch of The Blackening only coming after the foundation had been laid with the excellent, but not quite as celebrated, Through The Ashes Of Empire. Of Kingdom And Crown is certainly closer to the latter than the former; the band deliver and do so in crushing style, though I would restrain those celebratory cheers that the album is The Blackening 2.0.

Ostensibly a concept album, Of Kingdom And Crown is based upon the anine Attack On Titan. Thankfully, Machine Head do not tie themselves too closely to the source material, for as someone who knows very little about it, I can enjoy these songs and not feel like I'm missing something (I'm sure fans of the anime will get a richer experience than I did). Aside from 2-3 interludes, the songs are written in such a way that those unfamiliar with the story can instead see how tracks like "No Gods, No Masters" and "Rotten" work as topical commentary relating to the modern world (which, when you consider the source material is about a dystopian future, is a worrying thought).

Musically, Of Kingdom And Crown is the heaviest release by the band in over a decade and (thanks to some poor competition, Unto The Locust aside) is the strongest release from the band since The Blackening. There are plenty of tracks here that sound like the band have found their groove again. The album's best moments come in a pair of three-track runs that will melt away any hesitation you may have had going into the album. "Slaughter The Martyr" builds into a crushing epic that twists and turns while maintaining its power and energy, while "Choke On The Ashes Of Your Hate" and "Become The Firestorm" are more direct, but no less powerful, balls of frenetic energy.

The other three tracks come after a slightly less enjoyable run of tracks, kicking off with "Kill Thy Enemies" through "No Gods, No Masters" and ending with "Bloodshot"; though these tracks have their flaws (the lyrics and chorus to "Kill Thy Enemies" and "Bloodshot" especially are poor), damn if they aren't hard-hitting musically and addictive. What all six of these tracks share is that they feature solid and tight musicianship, with some solid song craft, with Vogg stepping into Demmel's shoes and standing tall (see "Bloodshot"'s guitar work) while the drumming is tight and efficient.

Where people are quick to compare the album to The Blackening, I find it has far more in common with another Machine Head album, that being Unto The Locust. Both albums share the similarity of having great ideas that aren't optimally utilized, leaving you with moments of potential rather than classics. Perhaps the most obvious example of this is "Unhallowed", with its killer groove riff leading into a song that doesn't get that interesting until the halfway point, a hallmark of the latter album.

The two biggest shortcomings, however, revolve around the lyrics and how they are delivered, a synergy that compounds the shortcomings of each issue. While Flynn's vocal style is pretty well established at this point in the band's career, there is something about it that really grates this time. "Choke On The Ashes Of Your Hate" and "No Gods, No Masters" are perhaps the most immediate examples; they don't detract from the strong musicial performances on these tracks, but they certainly hinder their potential. The lyrical content on tracks like "Rotten" feels too tryhard, and several steps beneath the quality of the musicianship.

Machine Head manage to pick themselves up and dust themselves off after the embarrassment of Catharsis and the implosion of the band's prior line-up with Of Kingdom And Crown, an album that is likely to rank as another high point in the band's career.

Written on 06.09.2022 by
omne metallum
Just because I don't care doesn't mean I'm not listening.
More reviews by omne metallum ››