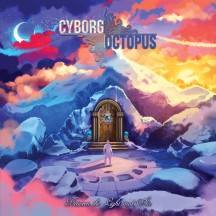 
Between the light and air lies an octopus with designs on being a chameleon.

Cyborg Octopus hail from San Francisco, and play a form of progressive metalcore with a vein a wackiness flowing through it. Despite the album name that perhaps hints at a tribute to a presumed influence in Between The Buried And Me, Cyborg Octopus don’t follow their fellow American quintet’s penchant for excess; sophomore album Between The Light And Air comes 6 years after the group’s debut, and both albums combined are shorter than some BTBAM records. At 33 minutes long, this album is lean, but it’s not short on ideas or variety.

It's not like the band through chaos at listeners right out the gate; “Old Stories” is a fairly conventional-sounding metalcore cut, even if the synths are a bit more on the cheesy power metal end of the spectrum, but the saxophone solo that they slip in late on does offer at least some surprise. However, “Spectres” sets the tone for things to come by jumping away from that initial style into something rather different. Between the opening saxophone, the punky drums and gang singing, it feels like Cyborg Octopus might be going into some kind of folk punk ditty, yet the blasts, breakdowns and screams that float in and out of the song mean that this path is never fully committed to. Later on, Cyborg Octopus may be again doffing their cap at Between The Buried And Me with “Trash Island”, a song that follows in the vein of BTBAM’s “The Black Box” by going full surfer rock.

Whether this sheer exuberance works in the band’s favour is perhaps open to debate; for me, Between The Light And Air is at its strongest in the back-to-back hit of two songs that are arguably closest to one another out of any on the album’s tracklist. The synth-heavy prog-melodeathcore cut “The Projector” shows some similarity to tracks from Persefone and pulls off such an approach really neatly, flowing between sections seamlessly and throwing in memorable hooks. Immediately after that, “Seizure Of Character” dabbles with dainty piano, The Black Dahlia Murder-esque frenetic melodeath, and an emotive second half that I have been wracking my brain trying to work out who it reminds me of, particularly the clean singing (the closest I’ve gotten so far is “Add Reality” from Dan Swanö’s Moontower, but I’m sure there’s a more appropriate reference I could include here), and the end result is, for me, the clear highlight of Between The Light And Air; the switch from that melodic singing into a rousing chugging march is really exciting.

Cyborg Octopus are a very technically adept band, and one that is able to translate that ability into varied and exciting ideas. I like this album quite a bit; I think it just perhaps lacks a little in consistency, as the middle stretch rather towers over the start and finish, and as such I’ve not found myself embracing it as a complete package quite as much as its strongest moments would have me want to. Still, as long as it doesn’t take another 6 years to make 30 more minutes of music, there’ll hopefully be another opportunity soon to see if they can take that next step and fully convert me.

Written on 22.09.2022 by
musclassia
Hey chief let's talk why not
More reviews by musclassia ››