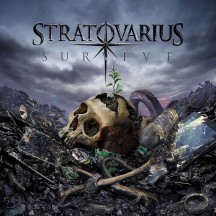 
Has there ever been a better example of a band carrying on in the absence of its figurehead than Stratovarius? Struggling to survive during the last days of Timo Tolkki, the current iteration of the band has now released an album called Survive while positively thriving.

It’s been a pretty decent couple of years for power metal fans; first, you had the landmark return of Kai Hansen and Michael Kiske on Helloween’s 2021 self-titled, and then just earlier this month, Blind Guardian brought back some of their 90s intensity on the beastly The God Machine. In contrast, Survive doesn’t represent a revolution for Stratovarius; this is the third full-length record released with the band’s current line-up, and remains stylistically very much in line with Nemesis and Eternal. However, there’s no need to reinvent the wheel when you’re in a groove like this, and Survive is possibly the strongest output yet from this current quintet.

On first listen, I wasn’t sure I would come to have that opinion; while I found it solid from the off, it was slightly less explorative than Nemesis was, and it also didn’t have a standout song from the off in the way that “My Eternal Dream” blew me away on Eternal. Additionally, while the closing 11-minute epic “Voice Of Thunder” had the contents to justify its length, I wasn’t as awed by it as the similarly lengthy closer to Eternal, “The Lost Saga”. However, with prolonged exposure and reminder replays of the two previous records, I’ve come to appreciate the real strength of Survive: its consistency.

The last two albums had a handful of top-notch songs, and a bunch of respectable album tracks, but I was never compelled by the prospect of a full-album listen to either of them after first encounters. In contrast, Survive is a record that brings the quality reliably throughout its runtime. First off, the Finns opted against including a ballad, which is a stylistic decision I will always encourage power metal bands to take, considering the proportion of attempts at ballads by such bands that end up being complete duffers. Instead, they really seem to have aimed for ‘all killer, no filler’ here, and while I’m not overly interested by the late-album cuts “Breakaway” and “Before The Fall” (both are fine, but not especially noteworthy, and the latter is rather on the cheesy side), I feel they’ve got quite close to this aim.

Although I’ve not found the next “My Eternal Dream” here, there are a few songs that have definitely come to the fore across replays, and the relative diversity of these songs is another plus for Stratovarius. On the one end, there’s the dark, mid-tempo anthem “Frozen In Time”, while on the flip side, “Glory Days” is high-energy and wonderfully bright. The one thing that really unites them is having top-quality choruses, both of which hype me up in their original formats and are taken further on later repeats. Another song with a slightly darker tone that stands out is “Broken”, a track driven by an ominous low-end triplet chug during the verses to great effect, and this song is immediately paired with another song that shines with its brightness, the vibrant and playful “Firefly”.

However, there’s more to enjoy here beyond those few. “Survive” is a to-the-point anthem, but it gets the album off to a positive start and is elevated by a great bridge, and the other single from the record, “World On Fire”, is carried by some well-structured vocal passages. But even tracks that would be obvious ‘album filler’ candidates offer more than just padding. “We Are Not Alone”, midway into the album and squeezed between two singles, has enough charm to its playful chorus to justify its presence, even if it's unlikely to be many people's favourite song from the record.

Stratovarius aren’t doing anything revelatory here; everything they’ve done here is very much in line with what they’ve been doing for the past decade or so (even if they’ve maybe not been doing much recently, with this their first record in 7 years), and there's not really a song or moment that blows one away while listening. However, without necessarily releasing a modern classic, they’ve shown themselves to be seasoned professionals with this latest effort. That comes through both with the consistent quality of the songwriting and the strong levels of their performances; Timo Kotipelto, in particular, sounds more effortlessly natural here than he did nearly a decade ago on Nemesis. Anyone who’s enjoyed the band’s post-Tolkki streak thus far is very likely to savour this record as much as the others, if not more so.

Written on 25.09.2022 by
musclassia
Hey chief let's talk why not
More reviews by musclassia ››