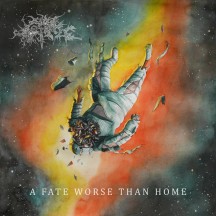 
This beginning of the year was pretty good for one-man bands. We've had one man bands from China, Russia, France, Iran/Canada, and the USA. Now how about one from Malaysia?

Iravu is a name I have stumbled before, but as one of the many many names that contributed to the antifascist metal compilations Black Metal Ist Klassenkrieg and Black Metal Rainbows. Needless to say, I didn't check out any of the bands from those I wasn't already familiar with, but with Iravu releasing their debut album this year, and one with such an intriguing cover art, plus the prospect of covering Malaysian music (I have covered Indonesian and Singaporean, but never Malaysian), meant that an addition was due. A listen to A Fate Worse Than Home also meant that a review was due as well.

Iravu already have some EPs under their belt, already showing some range from the slightly more straightforward black metal of Like Shades Of Night and the space ambient of One Day, One Week and Sounds, and all of it seems to come to more of a culmination in the project's move to full-length territories. A Fate Worse Than Home is merely 35 minutes, so 12 minutes longer than Like Shades Of Night and 4 minutes longer than Sounds, thus not that big of a step, and it's not like Like Shades Of Night wasn't already an excellent sound (seriously, that solo on "Idle" is amazing), but now the sound takes an even sharper turn towards atmospheric and progressive black metal. It takes one look at the cover to figure out what kind of atmosphere the album is striving for.

And while the album's appearance is very sci-fi and cosmic, that is all a coating of the album's emotional appeal. As Hareesh mentions: "It's a very personal story that's wrapped in a shell of a Science Fiction concept album." They then list some of the artists who have served as inspiration for the album, like Opeth and Mare Cognitum, but I'm really surprised that Oranssi Pazuzu is not among the mentioned ones, not only due to the cover art's resemblance to Muukalainen Puhuu, but because there's a strong psychedelic presence in the cosmic atmospheres of the album. The album relies a lot on atmosphere, and there's something about the mix of a rawer sound and pristine sounds that really fits the theme, but the songwriting and performances are outstanding as well. The solos are an obvious highlight, with some props to the drumming as well, creating an insanely good mix of ambient psychedelic cosmic metal and technical progressive metal. There are some transitions that feel a bit forced, so there is still some work to be done on the flow, but I'm grasping at straws to find defects in it.

There's still some work left before Iravu really polish up their sound, but my expectations for A Fate Worse Than Home were exceeded and then some. "Maybe someday I will talk about it freely, but now is not the time." I hope that time will come for Hareesh.

Written on 09.01.2023 by
RaduP
Doesn't matter that much to me if you agree with me, as long as you checked the album out.
More reviews by RaduP ››