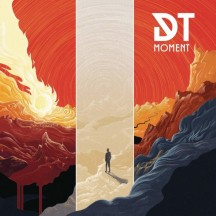 
There have been a number of stellar moments in the impressive career of Dark Tranquillity to date. Moment is not one of them, but it's not a disaster either.

Anyone who saw my Getting Into Dark Tranquillity article last month will know the level of esteem I hold the Gothenburg giants in, as well as my more muted opinion concerning their output in the past decade. None of We Are The Void, Construct or Atoma were bad albums, but they weren't the group's best work, and the first two in particular had several tracks lacking the emphatic nature of their best work. As such, I approached Moment, the group's first album without founding guitarist Niklas Sundin (replaced with Christopher Amott of Arch Enemy fame, as well as Johan Reinholdz from Andromeda and Skyfire) with diminished expectations, which it has matched, but not really exceeded.

As far as the sound of the album goes, if Atoma was a step back towards their 2000s sound after Construct, Moment sees the band changing course and heading back towards Construct territory. There are a few up-tempo tracks here, but a lot of the album is more measured tempo-wise, and the keyboards remain as prominent as they've been since Fiction. Perhaps the most notable thing about Moment is the prevalence of clean vocals; they don't pop up until "The Dark Unbroken", but after that point this might be the most extensive use of them on a Dark Tranquillity record, or at the very least since Projector. The cleans generally work fine, although I do prefer their incorporation into an album like Projector, where they have more gravitas.

I commented in the album thread that Moment sounded like Dark Tranquillity playing it safe, which may not be entirely true, as the increased use of cleans is a departure from Atoma, albeit not a big jump from albums such as Construct, Fiction or Projector. However, "Phantom Days" is a classic cut from the band stylistically, from the memorable lead guitar riffs, tempo shifts from verse to chorus, and signature rasps from Mikael Stanne. It's not a modern classic for the band, but it should easily satisfy fans of the group. The song does feature an unusually extensive solo section (or more, duet, with both guitars contributing leads and harmonies), which has been highlighted as a distinctive feature on Moment, although reactions have been mixed as to how naturally they are incorporated into tracks. Personally, I enjoy their inclusion on certain tracks, with the bleeding of the solo back into the chorus on "Identical To One" working especially nicely; however, I can see why people may find the features on "A Drawn Out Exit" or "Standstill" to be slightly unnatural.

After "Phantom Days", the next couple of tracks are enjoyable enough, particularly "Identical To None", one of the fastest and most energetic cuts on Moment. However, as Moment progresses, a degree of apathy begins to develop. "The Dark Unbroken" isn't a bad song, but aside from quite a pleasant chorus, it's not particularly exciting, nor is it all that moving. If it was featured on a more generally exciting album it wouldn't be an issue, but when it's subsequently followed by the likes of "Remain In The Unknown" (which sounds every bit like a song that just missed the cut for Construct), "Ego Deception" and "Eyes Of The World", their combined (lack of) impact accumulates, resulting in a mild sense of indifference. It's probably not helped by sticking the clean vocal-heavy, slower tracks together in a bunch (4-6 in particular, but the couple that follow as well to a lesser extent).

I think the comment I made above about "Remain In The Unknown" does a decent job of summarizing my thoughts about Moment in general; it's an enjoyable listen, and does have some good highlights (the aforementioned "Phantom Days" and "Identical To None", as well as the highly memorable main riff of "Empires Lost To Time"), but outside of those songs, there are a few too many here that feel like tracks left on the cutting room floor during writing sessions for their albums since Fiction, managing to deliver the general sound you would expect for the band without featuring the memorable hooks that make their stronger songs so vital. It's probably not their worst album (I would rank it above Skydancer, Construct and possibly We Are The Void), but it does seem to indicate that for those dissatisfied with their post-Fiction output, Atoma is likely to be an exception rather than a return to form.

Written on 22.11.2020 by
musclassia
Hey chief let's talk why not
More reviews by musclassia ››