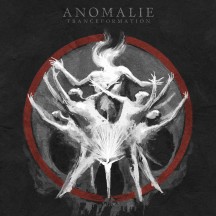 
Can you sound trance-like without being psychedelic?

Anomalie, not to be mistaken for the funk jazz project of the same name, is also a one-man project, except for the session drums. Lukas Schlintl has been the project's drummer on all albums except the debut, and he reprises his role here, but this still seems to be less of a duo and more of Chris Marrok's project. Chris is also a live member for bands like Harakiri For The Sky, Agrypnie, and Schammasch, so it's not like he is a stranger to sort of being in another band but not really. Plus, both of them were once part of Selbstentleibung. Memberships and related band namedropping aside, Anomalie has been a band whose place in the post-black metal world has always been as a recognizable name, but not really as a leading force.

That might also be because of how post-black metal still struggles to define itself and the way most of it already fell in the blackgaze sphere. A lot of Anomalie's previous work could comfortably sport the "blackgaze" tag, even if the "gaze" still felt more like "post". But for the most part they still clearly felt like black metal. Tranceformation on the other hand is both the band's least gaze-y record and also the least black metal. There's still some left, especially the latter, but it's more of an afterthought or an implicit association with the sounds that are still left. So, genre-wise, it's closer to progressive/post-metal, but something that still clearly comes more from a post-black metal sphere. The vocals, even at their harshest, feel more in line with post-metal than anything pummeling or cold that one could expect from the "black metal" tag. But the thing is, clean vocals feel more in abundance here.

While we're on the vocal side, there's some guest spots from Rotting Christ's Sakis Tolis and Enthroned's Nornagest, both of which add some nice nuances to the vocal field. And as far as the clean vocals are concerned, there's a ritualistic and almost gothic/folky vibe from them. This kinda works hand in hand with how the atmosphere of the record is more trance-like. Both melodic black metal and post-metal already had ways to sound hypnotic, so merging them together creates something very effective at sounding trance-inducing without sounding psychedelic at all, which are two terms one often uses interchangeably for a lot of atmospheric music. But as atmospheric as Tranceformation is, it never explicitly puts emphasis on it, instead just letting it ooze from its melodies and textures. For a one-man band (and a drummer), Anomalie is extremely well-adjusted to making it sound like they're a full band. The bass is full, the guitars hit, and though it's not performed by the mainman, that guest violin on the 5th track is such a nice touch.

And when I mentioned that post-black metal struggled to define itself, this feels even more true as each of the bands that represented that tag, from Der Weg Einer Freiheit to Harakiri For The Sky, all continuing to evolve their sound in different directions. That rings true for Anomalie as well, and Tranceformation is a testament to that.

Written on 02.12.2021 by
RaduP
Doesn't matter that much to me if you agree with me, as long as you checked the album out.
More reviews by RaduP ››