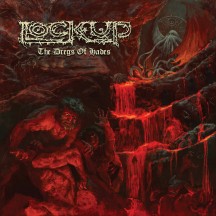 
This is grindcore motherfuckers!

The Dregs Of Hades is the first Lock Up album with drummer Adam Jarvis (Misery Index, Pig Destroyer), who replaced founding member Nick Barker (ex-Cradle Of Filth, ex-Dimmu Borgir) in May 2020 and it also sees the return of vocalist Tomas Lindberg (At The Gates). The band now features two vocalists since ‘Tompa’ is teaming up with Kevin Sharp (Brutal Truth, Venomous Concept) who was the frontman in the previous record and the intriguing line-up is completed with the likes of Anton Reisenegger (Criminal, Brujeria) on guitars, who replaced the late Jesse Pintado in 2009, and founding member Shane Embury (Napalm Death and about a dozen others) on bass.

With the band members residing in various places across the globe, Lock Up’s latest album was recorded remotely due to the Covid-19 pandemic. Most of the music was written by Reisenegger and it has this distinct South American brutality and filthiness that bands of the ‘80s, like Sarcófago, were renowned for.

With the exception of the atmospheric opener and the doomy closer, the songs fall into the 2-3 minutes range and they are pummelling. The riffs are vicious and come in torrents but even when the pace is unrelenting, you can still hear that there is some great guitar work taking place - just check out “Dark Force Of Conviction” or “Ashes” to get an idea of what I mean. And when the blasting surrenders for breakdowns to take over, you have some super heavy groove to test even the strongest of necks (test yours with “Hell Will Plague The Ruins”, “The Dregs Of Hades”, “Misdirection Thief”, “A Sinful Life Of Power”, and “Reign On In Hell”). With guitars like these, Lock Up just shove The Dregs Of Hades down the throats of those who say that grindcore is just noise.

Performances-wise, this album rips. The combination of vocals by Lindberg and Sharp is an unapologetic double penetration of your earholes, while original vocalist Peter Tägtgren (Hypocrisy) is also heard on the chorus of the title track. Many people have complained about Tompa’s strained vocals on the latest At The Gates album and they do have a point but for this kind of music that Lock Up play he blends really well with Sharp. I have already mentioned the guitar work in the previous paragraph, so this is the time for a standing ovation to the belligerent drumming of Adam Jarvis. He is the star on this one. Don’t just take my word for it; when Lock Up posted the video of “Dark Force Of Conviction”, Nick Barker commented: “Sounds killer! Adam slays!!!”. Yes, Barker is praising his replacement and his replacement slays all right. I am pretty sure that when Jarvis finished recording his parts, the drum kit was taken to hospital and was put in the intensive care unit. But it didn’t survive unfortunately. May it rest in peace.

The Dregs Of Hades is a boxing match in which the band is clearly winning because you, the listener, are the poor creature getting repeatedly punched in the face until you cannot tell anymore where your eyes, nose, and mouth are located. It has the songwriting maturity that is expected from a band of seasoned musicians but also the untamed energy and the sheer enthusiasm of a bunch of 20 year-olds.