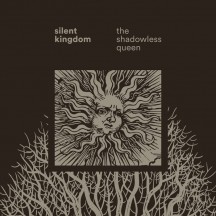 
By now, the one-song album is very much a done-to-death gimmick, and yet it’s one that allures me time and time again.

Maybe it’s because such endeavors demand that the songwriters prioritize structure and cohesion across a full album, but I consistently find myself enjoying single-song albums. This remains the case with The Shadowless Queen, the seventh full-length album from Silent Kingdom. From Bosnia and Herzegovina (the latest stop on my musical world tour in 2022), Silent Kingdom aren’t historically known for projects such as this; for most of their 20-odd years existing as a band, they’ve been playing extreme metal, and while they’ve had long songs during that time, 10-minutes has usually been a healthy limit for them. On The Shadowless Queen, Silent Kingdom cement the departure from extreme metal for a more classic progressive metal sound that first occurred with Where Secrets Meet, and are now happy to write a song that runs for over half an hour; at that length, “The Shadowless Queen” is a very long song, but The Shadowless Queen is quite a short full-length record, and that digestibility works further to their advantage.

Now, when I say ‘classic prog’ sound, I mean it; without sounding like a product of the 70s, there’s very much a retro-prog current running through The Shadowless Queen, from the more technical and complex parts through to the mellowness that makes up most of the album. That mellow edge that Silent Kingdom exhibit, a surprising one for a band that once reveled in growls and grim riffs, is the main selling point of The Shadowless Queen for me; Mirsad Rahić has a moving and soothing presence behind the microphone, and works nicely in tandem with the melodic guitar, piano and keyboard work. At its best, The Shadowless Queen has a Green Carnation-esque full-bodied darkness to it.

When I’m less sold on it is when the band focus on the exhibitionist side of prog; one of those moments is right at the beginning of the album, where a solid couple of minutes of flamboyance in the vein of Opeth’s more excessive segments from their post-Watershed career. The more angular riffs detract from the emotional approach that Silent Kingdom pursue across large stretches of the record otherwise, but thankfully they occupy a small minority of the album’s runtime. I also recognize their purpose of adding dynamic contrast on the album; however, I find that works really well in the closing 5 or so minutes of the track, where increasing speed, complexity and intensity and supported by a grounding sense of groove and melody, and less so in the obnoxiously wanky detour about 10 minutes into the song that just kills the vibe of what the album has been working towards up until that point. Still, the technical abilities of the band members, particularly Amir Ćefo on keyboards, are commendable.

The Shadowless Queen isn’t going to be my favourite prog album of the year; however, considering how Silent Kingdom used to sound, it’s been an impressive stylistic transition, and considering projects as ambitious as this are usually a case of ‘sink or swim’, there’s a lot more swimming than sinking going on here.

Written on 26.04.2022 by
musclassia
Hey chief let's talk why not
More reviews by musclassia ››