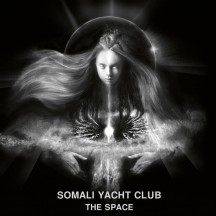 
Somali Yacht Club descended from The Sun to The Sea, but have now ascended into The Space.

Somali Yacht Club announced the release of The Space, their third full-length record, on 16th February, with a proposed release date in late April. Eight days later, the group’s native Ukraine was invaded by Russia, at which point I imagine thoughts of this album went very much to the back of the group’s minds. However, the record still exists, the band are currently unharmed (as far as I am aware), and they have made the logical decision to continue with sharing the fruits of their labor to the world.

Somali Yacht Club aren’t an easy band to categorize stylistically; they most frequently get labeled as a stoner metal band, but when I reviewed The Sea, I mentioned how they merged stoner metal with post-rock, shoegaze, alternative and progressive styles to produce something unusually introspective for a stoner metal album. Somali Yacht Club are a band that lurk on the fringes of the stoner metal umbrella, similar to bands such as Spaceslug and Methadone Skies; it’s clearly a major component of a fair amount of the music featured on The Space, but like those other two bands’ latest albums, there’s a lot of music here that feels, at best, tangentially connected. Post-rock, alternative metal and shoegaze all remain significant constituents to the overall product, arguably even more so this time, and such a combination leads to a rather unique album.

Somali Yacht Club pull off the neat trick of fitting a range of different styles and influences into The Space while making it feel like a consistent sound. The opening to the album’s first track, “Silver” is closer to the intro to Hum’s Inlet than anything else I can think of. Beyond this, there’s a post-metal feel to the slow riffs, an air of shoegaze and also some slow stoner rock sensibilities in the clean guitar licks. “Obscurum” goes further into shoegaze territory; when the floaty vocals come in above the thicky distorted guitars in the chorus, my mind goes to Jesu’s Silver. When the album does feel more rooted in stoner rock/metal, a lot of it comes down to the clean guitar work; the opening to “Echo Of Direction” brings to mind the likes of King Buffalo and Naxatras, while a tasty psychedelic interlude in the lengthy closer “Momentum” has shades of Elder’s recent material to it. There are some more driven, slick riffs and grooves to be heard as well, such as the dirty bass groove of “Pulsar” above which psychedelic guitar notes echo out.

More than anything in terms of style, the thing that ties The Space together as a consistent and natural album is the persistent gentleness and mellowness of the music. Even in the moments where the volume comes, such as the slow, big post-metal riff that opens up “Momentum”, it’s never an explosion of sound; in this instance, the very subtle background keys help take a bit of the edge off. This is where I feel The Space differs a bit from The Sea; that was an album with a sense of melancholy to it, and that’s something that comes across in fits and starts on The Space (such as “Obscurum”), but I feel it’s outweighed by the peacefulness that permeates a lot of this record.

Whether this is a step up from The Sea, I’m inclined to say yes. First, I'd say that the mix of styles is more natural and well-implemented here. When I reviewed The Sea, I felt that the more typical-sounding stoner metal parts stood out as stronger than the less typical post-rock-dominated parts; in contrast, I feel that each genre that is built into The Space works equally well in realizing the final result. I also feel that the climaxes to the longer songs, “Pulsar”, “Echo Of Direction” and “Momentum”, are a tad more impactful than some of the ones on The Sea. There’s perhaps a next level that they could still reach with how these songs evolve and peak, as it’s not an album that ever left me with a sense of wonder in the way that the best post-metal can, but that’s very much nitpicking. With the band’s future uncertain for the time being, we can at least treasure their present incarnation and the realization of its vision with The Space.

Written on 02.05.2022 by
musclassia
Hey chief let's talk why not
More reviews by musclassia ››