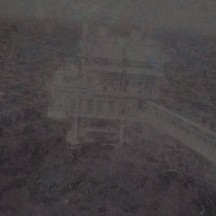 
Do you remember how SubRosa took long, slow doom and gave it a dark folk twist? Well, take that as a musical base, add some post-metal, drone metal, dark ambience and whatever else you feel like throwing in, and you’re starting to get towards what Soldat Hans are making.

Three albums in, and this Swiss ensemble, built around a five-person (formerly six-person) core but augmented with additional contributors, have really started to get a hold on what they’re aiming to accomplish with their unique blend of styles. When we added this band to the database, they were categorized as ‘doom metal’, ‘folk’ and ‘post-rock’, and those all remain present, but even that combination of styles, or the group’s own self-description as a ‘downtempo folk doom metal’ band, fails to fully capture what can be heard on Anthaupt. Pretty much the only thing you can confidently say to describe Anthaupt is that it is slow, unwaveringly so, but beyond that, the forms in which that slowness materializes are fluid and unrestrained by genre.

“Eighty-Two Percent Chance Of Rain”, at less than 7 minutes, is the baby of the bunch as far as the tracklist is concerned, and is pretty much a post-rock song, but one that is rooted around acoustic instrumentation for the most part; the dynamic range of the track embodies the post-rock mentality, but the area of the rock/metal spectrum that said range spans is very much on the lighter side, with those peaks of volume represented by only mild distortion. Yet not one second into the title track, and listeners are confronted with genuine metallic brunt, a ponderous, loud trudge of a riff lurching around. This twisted introduction is gradually turned into something one part grandiose, one part disturbed; as much gravitas as the synths and trombone blasts bring, the dramatic jazzy singing of Carol Schuler, when paired with menacing, heavily distorted screams, turns the vibe towards one of a dark cabaret.

With all these ideas going on, one might expect “Anthaupt” to descend into chaos, but the relentless, droning doom upon with everything is built prevents any breakaway momentum from developing. No matter what is happening, the glacial pacing keeps Anthaupt grounded. That pacing might be sustained by loud, brash drone doom, as it is in “Anthaupt” or in later moments of “Speechwriter”, or it might take a more minimalist ambient form, such as in “Horse Funeral” or the first half of “Speechwriter”, but it feels dependable, so dependable that the sudden outburst of jangly post-hardcore and grandstand guitar soloing at the end of, again, “Speechwriter” gives a major sense of whiplash.

When faced with an album as peculiar as Anthaupt, one looks for reference points wherever they may appear. Some of the guitar licks in “Anthaupt”, and the general vibe of the drumming in “Horse Funeral”, hint at a respect from the band for Earth’s The Bees Made Honey In The Lion’s Skull. Probably the other band that I most consistently felt the presence of during playthroughs was Cult Of Luna, whether it was “Waiting For You”-style builds in “Cinéaste, Cinéaste” or peaks within “The Jubilant Howl” that resembled moments from “The Silent Man”, particularly in the places where the organ comes into play. Ultimately, though, these comparisons, as well as similarly tempting ones to the likes of Nadja, fail to adequately represent the entirety of what Soldat Hans bring together across the hour-plus that Anthaupt plays out during.

I’ve spent a lot of time postulating on how this album sounds stylistically and how unorthodox I consider it to be, but how does that translate to enjoyment or emotional response? Anthaupt isn’t going to be for everyone; it’s too slow and too disinterested in sounds that make an immediate emotional impact to be so. Personally, I do also feel like it generally lacks what's necessary to take it from an adventurous artistic endeavour into something that consistently enthralls. However, if you have the patience and are willing to dedicate the time and focus to dig into the subtleties of this mesh of sounds, there are tantalizing ebbs and flows, meticulous layerings of instruments, and some occasional moments that really make an impression, such as the aforementioned climax of “Speechwriter”, the solo in “Cinéaste, Cinéaste”, and the gradually intensifying closing minutes of “The Jubilant Howl”.

Written on 06.05.2022 by
musclassia
Hey chief let's talk why not
More reviews by musclassia ››