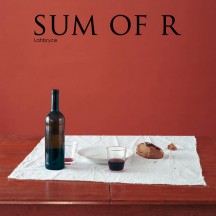 
The sum of R is one that mathematicians are too scared to calculate.

Sum Of R is a long-running project that initially served as the solo project of Swiss musician Reto Mäder, who has also been active in bands such as JeGong and Ohne. The first album was pretty much pure drone/dark ambient, but as different individuals joined and left the band, it evolved into a more metallic form of drone. Lahbryce represents another stage of Sum Of R’s evolution; the addition of Jukka Rämänen (Dark Buddha Rising, Atomikylä, Waste Of Space Orchestra, Hexvessel) as drummer in place of Fabio Costa was subsequently followed by the arrival of Waste Of Space Orchestra bandmate Marko Neuman, as a previously instrumental-only band now featured vocals.

This transformation has come with it a change in style; likely due to the presence of Rämänen, Lahbryce exhibits a form of twisted drone doom that bears a resemblance to Dark Buddha Rising. At the same time, there’s a ritualistic, measured repetition that falls in line with some songs from Wolvennest; the first track in particular, “Sink As I”, has a very similar vibe to the opening song of Wolvennest’s Temple album, “Mantra”. ‘Wolvennest meets Dark Buddha Rising’ is a very reductive way of describing Lahbryce, particularly as it progresses, but it should give you a broad idea of what Sum Of R have created.

I first heard Lahbryce live when Sum Of R performed it in full at Roadburn 2022, and the style was certainly enough up my street to grab my interest, but it is those newly incorporated vocals that really grab one’s attention. Having heard Waste Of Space Orchestra’s Syntheosis, although the vocals were predominantly demented harsh screams, I did remember some peculiar high-pitched cleaner singing, which I had probably assumed was a guest performer at the time. As it turns out, Neuman was behind both styles, and those almost androgynous cleans get more time in the sun on Lahbryce. The alternation between beastly growls, pained shrieks, soaring, eerie clean singing and banshee-esque wails while the instrumentation intensifies on “Sink As I” conjures up an aura of malevolence that any of Rämänen’s other groups would struggle to match.

Sum Of R are devastating at their loudest on tracks such as “Sink As I”, “Borderline” and “Hymn For The Formless”, all of which follow a similar template, but equally impactful at quieter points; “Crown Of Diseased” features a backdrop of only piano, ambient keyboards and alien sound effects, but they create a darkness that Neuman’s haglike vocal intonations take to an impressive depth of depravity. The keyboards/electronics can be dark and bleak, but Sum Of R aren’t afraid to incorporate brighter or more melancholic sounds, with a celestial shimmer created by a high-pitched synth motif repeated throughout the otherwise brooding and sorrow-tinged “The Problem”. In the same vein, the lengthy “Lust” alternates sad soft sections with darker heavier parts before adding some bright-sounding melodic synths above the final of said heavy parts for a jarring yet effective tonal clash. They can also throw some compositional surprises in there; “144th” remains quiet and forlorn for a large portion of its runtime, and right as it feels like the track is going to deliver a loud, aggressive conclusion, it instead dissipates into a chasm of amorphous noise.

Rämänen’s various projects have been delivering various takes on this kind of dark, psychedelic, droning doom for over a decade; now, he is working with Mäder to deliver a new yet equally effective spin on that concept, with Neuman’s chaotic versatility taking it to a whole new level. Whether this is Sum Of R’s ‘final form’, as it were, or just another step in a continual evolution remains to be seen, but Mäder has struck on something really great here.

Written on 08.05.2022 by
musclassia
Hey chief let's talk why not
More reviews by musclassia ››