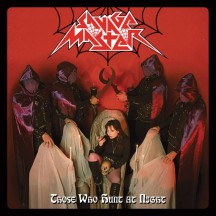 
Are those communist druids on the album cover?

While I was highly critical of the band's 2016 effort With Whips And Chains, Savage Master have come a long way since then, growing in the interim and refining their style; now firmly on the right side of the homage/plagiarism divide, Those Who Hunt At Night is a NWOBHM nostalgia fest that has an underlying charm running through it.

In a way, it is quite enjoyable going through the album hearing the band's take on NWOBHM greats and trying to mentally place which track who inspired by who. "Rain Of Tears" is a strong track in the Iron Maiden mold, "A Warrior's Return" is one of the stronger tracks Diamond Head never wrote; hell, Venom are even conjured up on "Vaster Empires". Neal's NWOBHM-worshipping riffs are perhaps the band's strongest assest, with tracks like "Spirit Of Death" and "Queen Satan" powered by his blues-based power riffs.

While it is definitely an improvement on their previous work, Those Who Hunt At Night isn't the complete reversal of fortunes that a hallmark movie would feature prominently. While the band have limited and lessened the problems faced by their prior work, there are still a few issues that prevalent across the album. One of these is that Stacy Savage, while not being a bad vocalist (possessing a strong and confident voice that fits the style of music well), finds her voice hindered by overuse of reverb and effects, which act as an anchor that prevents her from reaching her potential on tracks like "The Hangman's Tree".

The biggest shortcoming, however, is the production, which is highly reminiscent of Chastain's Ruler Of The Wasteland; that is, it sounds like it's been recorded from down a long hallway. The band's lo-fi raw production aims for old school garage rock, but lacks the charm needed to pull it off; as a result, tracks sound unfinished and warped rather than stripped down. The drum cymbals in particular have a fuzz tone that is annoyingly distracting throughout the album; try listening to "Eyes Behind The Stars" and without picking up on it.

While not completely breaking free of the shortcomings that held back their earlier work, Savage Master are straining to break free of that leash on Those Who Hunt At Night, with the band's growth being noticeable and commendable. While not the finished article just yet, if the band continue on this trajectory then I would certainly put them down in my diary for any subsequent work.

Written on 25.07.2022 by
omne metallum
Just because I don't care doesn't mean I'm not listening.
More reviews by omne metallum ››