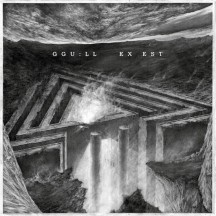 
“Ggu:ll is the vessel of the lost. A means of staring into the empty pockets of suffering. Enduring the lack of meaning and ground.” Since I’ve found nothing online explaining it, I will assume ‘lack of meaning’ refers to the enigmatic band name, and suitably shift my focus to the music.

I first became aware of Ggu:ll at Roadburn Festival in April of this year. There, they collaborated with Terzij De Horde, who themselves released a very decent album in 2022, with the pair of Dutch bands switching in and out during an 80-minute mammoth performance. To a degree, Ggu:ll have a musical overlap with Terzij De Horde, insomuch as both incorporate black metal and post-metal into their respective styles; however, the extent to which this occurs differs greatly between the two. In contrast to Terzij De Horde's post-black fury, Ggu:ll concoct a grim, trudging blackened doom sound that takes additional cues from the likes of drone and post-metal. Still, although the bands differ musically, Ggu:ll copy their compatriots in releasing a very decent sophomore full-length.

Ex Est is adorned with the kind of artwork I could see Regarde Les Hommes Tomber using, yet, while the ominous malevolence of introductory track “Raupe” could easily be found on an RLHT record, the rest of the album doesn’t follow suit. Instead, when looking for reference points for Ex Est (which nevertheless has a musical bleakness to match the monochrome artwork), it is easier to look for bands closer to their homeland. The sinister, black-tinged, repetitive trudge of “Falter” bears a certain resemblance early on to some of Wolvennest’s material (albeit less so when the track gradually intensifies), and that same comparison pops up in my head midway through “Enkel Achterland” when it slips into a very ominous groove. Another main band that came easily to mind is fellow Dutch doom group Ortega, specifically on the doomier songs, such as the funereal “Samt Al-Ras” and trudging “Stuip”. Lastly, I get hints of Year Of No Light’s doomy post-metal from Ausserwelt on “Hoisting Ruined Sails”.

This mix of blackened tones, post-metal atmospheres and doomy heft culminates in a sound that is dense, bleak and engrossing. Ex Est is also an album that has the ideas to enable songs to become greater than the stylistic concept alone, whether it’s the huge, pounding drum conclusion to “Enkel Achterland” or the intensely evocative closing stages of “Stuip”. That end of “Enkel Achterland” does mark something of a transition point for the album, as following this, the tempos drop down, and the doominess really comes to the fore. In a sense this is a slight shame; as much as the plodding doom sounds suitably dense and punishing, the groovier, textured sections from the first couple of songs add an extra sense of gravitas. Still, there is something of a return on the suddenly up-tempo closing track “Voertuig der Verlorenen”, on which the blackened part of the blackened doom equation comes to the fore more than on any other song (at least until it collapses into droning feedback).

Ex Est isn’t a mindblowing album, but it’s consistently solid mostly throughout, and in its most impressive moments, such as the two highlighted above and the apocalyptic trudge that rounds out both “Voertuig der Verlorenen” and the record as a whole, it can really be rather compelling. When I saw Ggu:ll and Terzij De Horde’s combined set at Roadburn, I found myself ever so slightly drawn more towards Ggu:ll, and I’m inclined to say the same about them on record as well; they are another fine addition to the Netherlands’ growing list of quality metal acts.

Written on 19.10.2022 by
musclassia
Hey chief let's talk why not
More reviews by musclassia ››