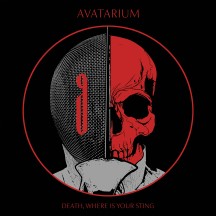 
Death, Where Is Your Sting is the fifth installment by the now well esteemed doom metal band Avatarium, a band that have proven to be much more than just a simple side project for Candlemass songwriter Leif Edling. In their decade of existence, they have provided us with some rather unique and stellar doom metal releases, and now they introduce us to Death, Where Is Your Sting; so, where does this album fit into that impressively consistent discography of theirs? Well, it's certainly a solid release, to say the least.

When looking back to this band's self-titled debut in 2013, you will notice that Edling didn't exactly stray too far from his Candlemass roots, in terms of riff structures at least. However, with the introduction of vocalist Jennie-Ann Smith, things became a little more interesting, as they developed a distinct style of their own. Edling carried on developing his songwriting ideas and riffs, contributing through to the 2017 album Hurricanes and Halos; at this point, Edling left Avatarium, after which Smith and guitarist Marcus Jidell continued handling songwriting duties, resulting in a darker and more theatrical sound. With this newly impressive sound, they began to develop and establish an all-new impressive progressive structure that has featured as a key factor in their unique style and sound since.

Death, Where Is Your Sting picks up where the previous album The Fire I Long For left off, that is, with their own unique blend of gothic and doom based around progressive structures, alongside Smith's sweet divine yet menacing vocals. The album begins with "A Love Like Ours", a song that sets a dark mood from the outset, with its slow gentle beginning that powerfully builds up, allowing Smith’s emotive vocals to pour through. The album subsequently maintains consistency with a quality collection of tracks containing groovy melodies and outstanding acoustic moments; on top of this, there are several tracks that also feature a psychedelic approach, such as the title track.

For me, one of the most notable tracks has to be "Stockholm", which is essentially a doom metal song at heart, but also contains an interesting blend of acid-folk and progressive rock; this song is also notable for Jidell's crunching and bending riffs, as well as the sections where the use of violins and acoustics is present. Another notable track for me is the downbeat and emotional "Psalm For The Living", a song that follows the theme of surviving the global pandemic, which is a subject that heavily influenced this album as a whole.

So here's Avatarium quietly carrying on their trend of fine unique releases, forever venturing into more daring and obscure progressive territories; Death, Where Is Your Sting is another release that does just that, showing just how far this fabulous band have come.