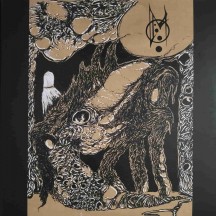 
01. Porcelain Dolls With Porcelain Souls
02. Points Of Purity Reached Through Pain
03. Scent Of A Blood Soaked Rag
04. Slipping Into A Vampurian Bath Of Existential Loneliness
05. Opening The Veins Of Anxiety’s Archangels
06. Final Thread Of Human Hope Spun By A Demonic Sorrow


Just lay down, close your eyes and fall deep into the vortex of demonic psychedelia.

Arizmenda quickly developed a small yet loyal fanbase in the early 2010s. The project, founded by sole member Juan Cabello, was part of the intriguing Black Twilight Circle. Along with bands like Volahn, Dolorvotre, Shataan and Blue Hummingbird On The Left, this group of musicians all unleashed a vast array of fascinating, and often very unique, black metal for the better part of a decade. Exchanging members and ideas, there was plenty of common ground between the bands, in particular the Mesoamerican themes, as well as the solid DIY attitude.

That being said, Arizmenda stood out by having an identity that separated itself from the rest of the group. The 2009 debut, Within The Vacuum Of Infinity... could very well be considered an underground classic by now and cemented this particular identity. It was a harsh yet incredibly sophisticated album in which improvisations ran amok, along with a strong sense of psychedelia through marvelous guitar leads, which launched the listener into a frenzy that felt both liberating and claustrophobic. Arizmenda was also notorious within the Black Twilight Circle for being particularly prolific by releasing 5 albums in 7 years, as well as appearing on two notorious splits. In a sadly unexpected twist of fate, Arizmenda and the Black Twilight Circle as a whole disappeared from the map, as if they were swallowed by the earth, in the latter half of the 2010s.

But out of nowhere, Arizmenda reappeared after 6 years. An announcement was made mere days before the actual release and I’m honestly still as shocked and stoked as I was a couple of weeks ago. I remember my doubts once I knew about Juan Cabello’s return: Can he still unleash such vivid sonic hallucinations? Can he maintain the success rate from previous releases? Can he build upon his well-defined sound? Cliffhangers are a bitch: YES, YES AND YES.

This is a return to full glory. At 66 minutes, this is Arizmenda’s longest album, but I promise you that all the time is put to good use. This is one busy and deranged album. All the elements I came to know and love about this project seem to have been elevated. The psychedelic leads are a constant in every song: ever changing, ever flowing. The excellent production, the clearest the project has ever had, puts these melodies close to the front for us to fully appreciate. In that regard this does feel like the most complete and professional-sounding album Arizmenda has released. The bass is thick and accompanies the drums to form a very catchy duo that matches the disorienting melodies of the guitar. Juan Cabello’s vocals are as insane as I remembered them. He whispers, moans, cries and shrieks in such a depraved, tormented way that he would make most DSBM bands actually die of jealousy.

It feels meaningless to discuss particular highlights as the songs flow so well into each other. Spiders Lust In The Dungeon's Dust is one hell of a trip that implores to be taken in one single bite. The waves of riffs range from euphoric to lamenting. When the tempo slows down, the music turns into a calming pool of melancholic melodies and warm bass. The tone is rich, captivating and highly hypnotic. This is a strong contender for black metal album of the year, my friends. It is a soothing, warm bath, but with the razor all too near the wrists.