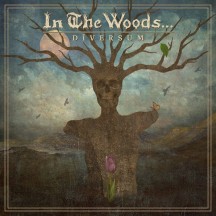 
In The Woods... very much had a voice of their own during their initial run; they’ve spent most of their reunion searching for a new one, but are perhaps zeroing in on one.

I must confess that, to this day, In The Woods... has always first and foremost been lodged in my head as ‘the band that formed when Green Carnation splintered’. It’s a very unfair statement; In The Woods... had a streak after their formation that clearly made them one of the most interesting products of the 90s Norwegian metal scene regardless of any ties its members or ex-members had with other groups, with their unique take on black metal on Heart Of The Ages followed by their very non-black yet still remarkable Omnio. However, as much as they made their impact on the 90s, they made no impact upon the 2000s due to their disbandment at the turn of the millennium, and their reunion records, Pure and Cease The Day, have encountered more mixed receptions than their original run of albums. I’m not sure Diversum will convert many that were disillusioned by the past two albums, but I can certainly find merit in it.

To be honest, even if it has now been 30 years since In The Woods... emerged after the band that came to be Green Carnation fractured, this is quite possibly the album of theirs where comparisons to their follow Norwegians feel most relevant. The doominess of Pure feels slightly toned down, and instead a black-tinged prog style that gives me vibes of an Enslaved-meets-Green Carnation fusion is becoming increasingly prominent. I’m certainly not the first person to hear Enslaved in reunion-era In The Woods..., but it’s a comparison that’s hard to overlook. On top of that, new vocalist Bernt Fjellestad bears some resemblance to Green Carnation’s Kjetil Nordhus, particularly on some of that group’s more goth-oriented albums.

It's true that Diversum is not a grand departure from Cease The Day in particular, so one’s mileage with this album is likely to depend a lot on how much these last two albums clicked with you. However, from the lingering doominess in the goth-tinged opener “The Coward’s Way” and its moody guitar melodies through to the more immediate hooks of “We Sinful Converge”, there is plenty of warm, rich and effective melodicism across Diversum. Against this, the semi-regular harsh vocals and more extreme-oriented musical passages add some meat to the record’s bones; it’s possible that some of those that wish for modern Enslaved to cast off their extreme vocal shackles will also find them similarly ill-fitting here, but at the very least the denser, more powerful instrumental packages make important contributions to this album.

One big advantage that Diversum has over its predecessors is a more concise mindset; the 67 minutes of Pure only served to compound the issues some of its critics had with it, while the comparatively bitesize 50 minutes here are far less likely to cause such issues, while also allowing In The Woods... to amply demonstrate their current vision. That vision is a broadly enjoyable one, although I will confess that some tracks do put a cap on my enthusiasm. “Moments” is a song that never quite gets going for me, while “Master Of None” has both one of the less interesting choruses on the record and one of the least naturally flowing sequence of sections. Still, I feel the majority of the album works well; “A Wonderful Crisis” has a nicely dark majesty to it, with the rolling bass drums adding plenty of heft, while the more subdued “Humanity” is subtly enchanting. Best is saved for last, however, as “Your Dark” leaves a strong last impression courtesy of its powerful chorus hook and some lush guitar texturing.

With this record, the new version of In The Woods... now have as many albums under their belt as the original incarnation. With only a single member, drummer Anders Kobro, connecting the two periods, arguably one should disconnect the two bands entirely and evaluate them as separate entities. If one does, new In The Woods... is clearly less revolutionary than the old one, but there is a charm to the darkly melodic prog that they craft, and while there are still arguably some limitations to be heard in terms of consistency and songwriting fluidity, Diversum is a respectable testament to the positive virtues of this group.

Written on 25.11.2022 by
musclassia
Hey chief let's talk why not
More reviews by musclassia ››