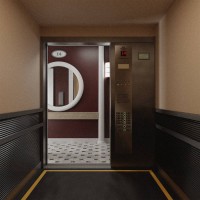 
Where do you go from, as a black metal band, after bursting on the scene with a pop covers album?

Fly In The Trap comes to quite some anticipation, but considering this as directly following the anticipation set by the most outrageous concept possible from January's Black Renditions would ignore the myriad of other EPs and splits released by Spider God in addition, some of which were also released in the span since January. So the self-described "hyper melodic black metal" sound of Spider God has had time to settle in even for the band's original material. But Fly In The Trap still has an unique position to fill as the band's first proper full length (of original material at least).

What I enjoyed most about Black Renditions, aside from the hilarity of that concept, since that does wear off after a while, is how it revealed some common DNA between black metal and pop, especially in regards to melodies. However, that is only some common DNA, so there is a lot of it that is on the outsides of the Venn diagram and that Spider God still tries to cover. When it's done in a cover with an outrageous theme, hilarity ensues. When it's done in an album that takes itself more seriously, even if much less frequently, that disconnect takes away more than it gives. The path between upbeat melodies and somber black metal is one that has to be walked very carefully. When Spider God do that, they nail a sound uniquely theirs. When they don't, it's jarring.

When taking the album's concept about Elisa Lam's mysterious death into account, the band's upbeat nature becomes even more jarring. There's something about their hyper melodies that works for pop covers but not when trying to have a mysterious concept. It is pretty disheartening that the listening experience makes me point out the shortcomings instead of leaving me with pure glee the way Black Renditions did, so now the way too pristine production and the monotone vocals suddenly become noticeable issues, distracting from what should otherwise be an uniquely fun sound, a myriad of amazing melodies, some of which do show more promise than anything Spider God did previously. But Spider God also had plenty of releases like the The Interior Castle and A Foreign Tongue EPs or the split with Μνήμα that never felt nearly as jarring.

Also, how sad is it that the only comment on this album's premiere stream is a spam comment?

Written on 29.11.2022 by
RaduP
Doesn't matter that much to me if you agree with me, as long as you checked the album out.
More reviews by RaduP ››