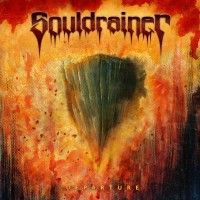 
Souldrainer have finally made their way back to the scene after an eight-year absence, presenting to us their fourth release, Departure. Let's see if this Swedish death metal act has carried their brutal bone-crushing material on from where they left off.

Even though Souldrainer had originally got back together into the studio in 2020, they were held back due to circumstances surrounding the deadly global outbreak of Covid, so it's only now in 2022 that they have been able to release their new offering Departure to us; was it worth the wait? Well, they certainly hit the ground running with this release by once again providing their brutal and ferocious, symphonic, melodic death trademark style to us, picking up very much where they left off with their previous output.

Well, their intentions were made perfectly clear here from the start; you needn't look further than the opening track, "Council Of Five", to realise where this album is heading. "Council Of Five" instantly begins in the band's usual ferocious and brutal manner, with the thunderous drumming pounding away from the very start, along with the ripping guitarwork and Wassberg's top-quality and insanely heavy bass, which for me is one of the strongest elements upon which the album is built. Things only start to get more interesting once the epic symphonic elements kick in, at which point the album becomes all the more engulfed in their layer-upon-layer structural approach. The growls by Marcus only complement this intense musical structure further, as his trademark vocal style provides a satisfying brutal edge to the overall sound of the album.

Whereas their past albums had slow calming sections between the onslaught, this album simply does not; it rather flows at an unrelenting, bone-shaking tempo throughout. Simply put, this album is like a steam engine that has simply lost control, gone off the track, and is heading for an imminent disaster, and it doesn't seem to show any indication of letting off steam until it hits the final track, "End Of The World": a rather fitting closer, I have to say, for what is essentially a relentless onslaught of ruthless melodic death metal brutality. "End Of The World" is also the highlight of the entire album for me; it's noticeably the most melodic, the sweeping guitar leads are highly memorable, and it also feels as though the album's highly intense apocalyptic atmosphere had been building up to this ultimate breakdown moment.

However, as good as this album is, I have to admit I struggled with the overly compressed layering from the rhythm guitar section; I'm sure the riffs had melodies in abundance, but sadly I find it difficult to catch any quality hooks from them. There was certainly plenty of aggressive energy in those riffs though, I will give them that. The symphonics, on the other hand, worked well; they helped create that brutally epic feel, and were the main contributing factor towards the apocalyptic theme of the album that I mentioned earlier.

Departure may not be the easiest melodic death metal album to get into this year; in fact you could argue in saying is it actually melodic at all? Or rather symphonic? It seems more emphasis went into the symphonic elements and atmosphere, but whatever the case, there is no doubt that Souldrainer could well be on the way to something here if they carry on down this route.