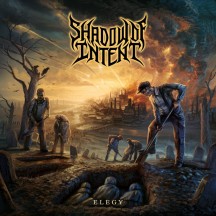 
2022 is absolutely not messing around as far as music is concerned.

A single week after the year began, Wilderun were already inducing collective eargasms in metalheads, and now a mere seven days later, deathcore fans have been gifted with Elegy. One of the major players in the symphonic deathcore subgenre, Shadow Of Intent turned a fair number of people, not least myself, onto this sound with 2019’s Melancholy. With Lorna Shore making even greater waves with Immortal and the viral sensation “To The Hellfire”, the stage is nicely set for the follow-up to Melancholy, and Shadow Of Intent do not disappoint.

Like Melancholy, Elegy is well-suited to bringing in fans not typically drawn to deathcore, because, like Melancholy, it’s not especially rooted within deathcore. Sure, Ben Duerr’s monstruous growls are par for the course for the genre, and there’s a fair number of breakdowns to be heard across the record, but even discounting the lavish symphonics draped across the record, there’s a relative accessibility to Elegy, with several songs veering closer to something like melodeath. Take, for example, the rampaging conclusion of “Farewell” or the simplistic (and admittedly cheesy) stomp of “Of Fury” (complete with power metal faux-harpsichord).

The accessibility of this record only works, however, due to how well Shadow Of Intent nail each element of Elegy. The ‘march to victory’ second half of “Farewell” feels triumphant, and the melodic solo that caps this section off steals the show, as do all the solos on the album. The bludgeoning and rampaging material, such as “Where Millions Have Come To Die”, is exhilarating and hook-laden. Duerr’s brutal growls are as satisfyingly emphatic as those of the best in the genre (making the guest appearance of Phil Bozeman slightly redundant), while Chris Wiseman’s sickening cleans, while less prevalent than they were on Melancholy, still lighten up the likes of “From Ruin… We Rise” (there’s also a brief cameo from Chuck Billy on “Blood In The Sands Of Time” that adds an interesting and different dimension). And when those breakdowns do come, such as towards the end of the aforementioned “Where Millions Have Come To Die”, they carry a hell of a punch.

Special mention is also warranted to the symphonic arrangements. Any band can slap some vague choral chants, string sounds and piano flourishes on a record and call it symphonic metal, but Shadow Of Intent really take the effort to make each addition impactful, whether it’s how the intensity of the piano increases from an ominous march during the breakdown of “Saurian King” into a frantic baroque workout leading into the guitar solo, or the persistent string motif that provides such majesty to the ominous march of “From Ruin… We Rise”. When Shadow Of Intent decide to pull out all the stops on the show-stealing three-part closing title track, they show flexibility of what elements to use when, with delicate keyboards and mellotron adding depth to “Adapt”, chorals dramatizing the faster vocal riffs and blasts, and triumphant strings bringing grandeur to the climax of “Overcome”.

At an hour in length, Elegy’s not flawless the whole way through, with “Life Of Exile” and “Blood In The Sands Of Time” lacking a bit of the impact of other songs I’ve mentioned. It also doesn’t have quite the same immediate memorability of Melancholy, primarily due to the reduction in the number of clean choruses (and clean vocals in general). However, what it might lack on that front, it has in abundance everywhere else. Elegy is exactly the kind of album Shadow Of Intent needed to make to cement their growing reputation, and I only hope that there’s some lulls in the release schedule across 2022 so that I can find some time to revisit it across the remainder of this year.

Written on 14.01.2022 by
musclassia
Hey chief let's talk why not
More reviews by musclassia ››