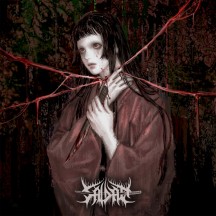 While black metal and weaboo culture are far from isolated, it isn't that often you see a non-Japanese band handling exclusively Japanese themes. Sure, you have the odd album here and there, but having a Tennessee band making music about Japanese folk horror is quite a reach. So enjoyment of Saidan's aesthetic comes less as appreciation of Japanese culture, but a sort of second-hand appreciation of said appreciation. It's like watching a Japanese artist doing a Viking metal album, where the entire appeal is being in awe at how Viking culture is perceived. And with Japanese culture being one of the most overtly beloved overseas, Saidan's whole vibe makes a lot more sense.

And sure, Japanese folk horror is pretty well-renowned. It's not like Saidan makes music about Neon Genesis Evangelion or something. And even taking away the cover arts and the lyrics, there's very little that's actually clearly Japanese themed in Onryō II: Her Spirit Eternal. That II should set you off that there's more Saidan where this came from, but the album I feel is most relevant for the discussion is not the original Onryō EP, but Saidan's only other full length album, 2021's Jigoku. To spell things out, Saidan play raw black metal that is incredibly melodic, but Jigoku especially had a very overt J-rock influence in said melodic side. That's not completely absent on Onryō II, but it doesn't inspire as overt of a Japanese vibe. Which is a pretty good thing, I'd want Saidan to stand on its own feet musically rather than living on borrowed cultures, and that's exactly what it does.

You might remember this other very melodic raw black metal album I reviewed, and I'm getting very similar vibes here as well. Though Spider God relied on melodies literally borrowed from pop songs, further EPs showed a melodic sense that could be applied to original black metal material. And this is what we see in Onryō II too. There's not really any need to be overt in borrowing from an established sound, because Saidan has become so good at the raw/melodic contrast, in which it's not a very out-there observation to say that the melodic part is very pop. And it's all the more fantastic for it. Think about it: pop and black metal are two things that would ideally be on complete opposite sides of the spectrum. Yet, they work so marvelously well together.

Like a point that I made in that review I referenced, maybe there's some questions to be asked about the common nature of the two genres. Melodicism in metal has often tried to very clearly distance itself from actual pop, so to hear it so whole-heartedly embrace the cheesy jovial energy of pop music is still bewildering, especially on an album about ghosts and witches and curses. Where Onryō II is not in how poppy the melodies sound, because it would work really well with a more traditional melodic black metal sound, but in how organically coherent it all sounds even as such, and in how the melodies feel instantly memorable regardless of their overt euphoria.

Written on 19.04.2022 by
RaduP
Doesn't matter that much to me if you agree with me, as long as you checked the album out.
More reviews by RaduP ››