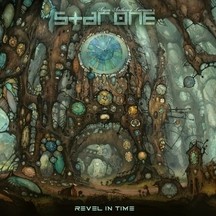 
Star One may well be one of Arjen Lucassen's most consistent endeavours of his prolific career. What was supposed to have been a one-off is now on its third album, although it's taken 20 years to reach this mark. However, this consistency within a fairly rigid creative framework also appears as its greatest weakness, resulting in what can overall be assessed as adequate.

There are three conceptual elements that hold Star One together. Firstly, it's heavier throughout than any other project of Arjen's. As the man himself describes, its starting point are riffs rather than the chord progressions. Secondly, its lyrical theme revolves exclusively around science fiction movies and series. Time is the overarching topic of this album. Thirdly, it has a recurring cast of brilliant singers: Damian Wilson, Russell Allen, Dan Swanö, and Floor Jansen.

The use of the same four singers throughout the whole albums consistently is what made Star One sound more like a real band. However, this has changed with the album at hand, where each song now features a different main singer in addition to the already mentioned four. With this small change Star One now sounds distinctly like a project blending in more with the rest of Arjen's creations. While the one-singer-per-song approach allows for introduction of new voices, it also robs some of the charm, consistency, and character that Star One had. The pandemic, it seems, makes demands of us all to accommodate the new circumstances.

Having listened to Arjen's albums for over 20 years, the potential for surprises from him has constantly been dwindling. Especially so within the sphere of a single project. It's hard to go through the first listen without getting the emotion of sameness. And that's a problem. On the one hand, there's the expectation for the certain signature sound. On the other hand, there's the inescapable rehash of elements from his extensive back catalogue. Both lie in the way of extraordinary results. It's not that the songs are bad. It's that they mostly don't stand out within the album or the project, let alone his whole body of work.

With that being said, there are exceptions to that feeling. And the fact that despite the sameness, I've still got tons of snippets off this album stuck spinning in my head for days. It's a weird position to be in mentally. I know this album to be good enough and I mostly like it for what it is. But at the same time I'm held back as I want it to be so much more. There's so much potential there that seems to be curbed for the sake of a working framework, and conformity, as well as habit. By sandboxing his creative force, it seems Arjen is never going to be free and innovative across the board, say, in a Zappa-like fashion. Not with Star One nor likely with Ayreon either.

There are three songs that I want to draw attention to. Firstly, "Today Is Yesterday" which is simply the most outstanding track on the album going for vocal lines not often present in Arjen songs. Swanö's interplay with the backing cast is just magnificent. This is raw and powerful. Secondly, "Lost Children of the Universe" which is just grand. While Roy Khan is great, it's the choir singing in Latin and the Steve Vai's extensive guitar improvisation that shine and bind it together. Finally, the title track "Revel in Time" because of its chorus but most notably because of Brandon Yeagley of Crobot. What a voice!

Without diving any deeper, this is an album that floats somewhere between the debut Space Metal and Ayreon's Flight of the Migrator. It's got a lot to discover if you're less familiar with Arjen's music. It's got more relistening potential than the recent Ayreon albums. So there's that. However, personally, I'd have liked the three songs mentioned to be the baseline. If I'm to lift a phrase from Craig's recent unrelated review, it's fine. It's fine. There's just that Arjen's fine is a notch above the rest. It's always a matter of what you're comparing to.