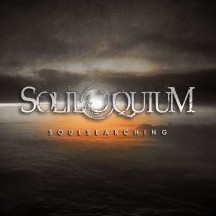 
What is it with the Nordic countries and melancholia?

You probably know that a lot of metal comes from the Scandinavic countries. Doom. Death. Black. Prog. All somehow feel extra melancholic when done in the North. How the hell do you make prog metal melancholic? Regardless, it is a tradition that has been going on since Candlemass' Epicus Doomicus Metalicus, and Soliloquium are here to uphold it. There's a lot less Candlemass in Soliloquium's sound, but you can trace all sorts of other Scandinavian bands in their sound, and the only one that I can trace that is not from Scandinavia is Be'lakor, which is an honorary Scandinavian band anyway. The point is, if you had no idea who Soliloquium are and you listened to Soulsearching, you wouldn't have a hard time guessing where they're from.

You might remember Soliloquium from two years ago, when Things We Leave Behind suddenly became the highest rated album of the year. Things have calmed down since then, and Soulsearching never reached the same performance, possibly because 2020 didn't have Cult Of Luna, Amorphis, and Allegaeon records to fill up the top of the year. But Things We Leave Behind did attract some attention to the band, leading us to nominate it for the best doom album of that year, and the mainman's, Stefan Nordström, omnipresence is a bunch of other bands like Desolator, Ending Quest, the Clandestine Cut winner for 2018, The Ashen Tree, lead me to interview him, and to be on the lookout for a follow-up.

I could turn this entire review into a namedrop fest, with Katatonia, Swallow The Sun, Insomnium, October Tide, Ghost Brigade especially feeling worthy of mentions. And I guess the easiest way to write about Soulsearching is to say that if you're a fan of those, you will probably like this as well. But in truth, what mostly gets me going about Soliloquium albums is the guests that they manage to land, with Soulsearching having guest vocals from Within The Fall's Henrik Ekholm, Wolverine's Stefan Zell, and Communic's Oddleif Stensland. The latter specifically guests on the opening track, "Floodgates", the strongest song on the record. And the thing is, once that song is over, I don't feel like the album's elements ever get that synergy again.

It's hard to tell why I don't enjoy Soulsearching as much as I should, and I don't really like focusing on the negative aspects rather than what it does well. But for everything that it does well, in all its melodic doom glory, I find that it sounds too much like a retread of the sounds of all these namedropped bands, without really hitting the same emotional highs. And Soulsearching is intended to be an emotional album, maybe even more so than all previous Soliloquium records, so not being completely immersed in that is a pretty frustrating experience. What really got me about Things We Leave Behind was that some more progressive and metalgaze elements were detectable on the outskirts of the melodic death doom sound, and that's the case here as well, but I was hoping those would be a harbinger of a more significant change in sound. Instead, Soulsearching is the more mature and developed of the two, but it still doesn't yet deliver on all the project's potential.

Written on 02.03.2022 by
RaduP
Doesn't matter that much to me if you agree with me, as long as you checked the album out.
More reviews by RaduP ››