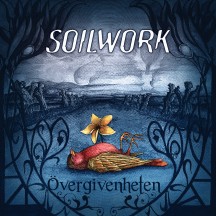 
As some of their Swedish peers strive to recapture former glories, Soilwork continue to forge a path ahead.

Helsingborg’s Soilwork started off very much in the vein of their Gothenburg counterparts with albums such as Steelbath Suicide and The Chainheart Machine, before a detour towards metalcore and alternative metal in the early 2000s. While those influences remained within Soilwork, a spark returned with 2013’s The Living Infinite, an admittedly bloated double album that nevertheless led the way for The Ride Majestic, the record that really made me sit up and pay attention to the band. Nevertheless, at the same time that this revival was occurring, frontman Björn Strid was exploring a whole different sound with hard rock project, The Night Flight Orchestra, and as time goes on, the line between the two bands is beginning to slightly blur.

Now, it’s not as if arena-friendly elements are entirely new for Soilwork; the likes of “Death In General” and “Full Moon Shoals” from The Ride Majestic and 2019’s Verkligheten, respectively, teetered in that direction. However, when I reviewed 2020’s A Whisp Of The Atlantic EP, I was already picking up on stadium rock swagger on certain songs, and across Övergivenheten lengthy tracklist, those very accessible elements continue to grow in prominence. The likes of “Valleys Of Gloam”, “Death, I Hear You Calling”, and especially “Nous Sommes La Guerre” opt for slower tempos, slick rocking riffs, and easy singalong choruses.

Still, although this The Night Flight Orchestra side of Soilwork is coming out more frequently, it’s not the dominating trait of the band on Övergivenheten. Another newer thing that is being sustained from A Whisp Of The Atlantic is the proggier ambitions; that EP’s title track over 15 minutes long, and while there’s nothing so ambitious on the new record, the title track does spread its wings with some dalliances with Western movie soundtrack sounds, while closing song “On The Wings Of A Goddess Through Flaming Sheets Of Rain” (following in the vein of The Ride Majestic’s “Father And Son, Watching The World Go Down” in ending the album with a complete mouthful of a song title) goes in quite a few different directions during its 7-plus minutes, with solos, riffs, softer detours and other elements to keep the listener entertained.

Above all of these newer sounds, however, this remains identifiably a Soilwork album; alongside the dramatic or hooky sung choruses, the likes of “Electric Again”, “Is It In Your Darkness” and “Dreams Of Nowhere” have up-tempo, sharp-edged riffs along with pounding drumming to provide plenty of sugar-coated energy. What’s more, the blasts, strings and buzzsaw of “This Godless Universe” pushes the extremity to a degree that Soilwork have very rarely flirted with in any previous songs. The end result of all of this is that you get an album that brings the expected virtues of Soilwork to the table, while backing them up with some additional treats.

Now, to me, The Ride Majestic will always be the benchmark against which Soilwork albums have to be judged, and when making that comparison, Övergivenheten doesn’t quite rival it; it lacks the non-stop onslaught of immediately memorable bangers from that album. Where that potentially becomes a bit of an issue is when facing up to the fact that this record is 3 songs and 15 minutes longer than The Ride Majestic (albeit two of those tracks are brief interludes), and some of the less interesting songs that pop up in the second half of the album do cause a loss of momentum. For me, “Death, I Hear You Calling” is most guilty of this, with that stomping trudge sapping some of my enthusiasm each time it comes around, but I’m also not entirely convinced by “Dreams Of Nowhere” and “Golgata”. It would also be fair to say that several songs here would have benefitted from a bit of trimming; as much as I like "Nous Sommes La Guerre", it's not a song that makes sense as one that runs for 7 minutes, and a couple of others are padded a bit too much towards the end of their runtimes.

At the same time, though, this is another solid addition to the Soilwork catalogue. The one ace up the band’s sleeve that they will presumably always have is Strid’s vocal ability; having revisited some of the earlier hits from the band’s career to remind me of their trajectory in preparation for this review, I really do feel that he is just improving with age, and his cleans sound better than ever on this album. When paired with instantly memorable choruses such as those on “Nous Sommes La Guerre” and “This Godless Universe”, it makes for a winning result, and nowhere is this better displayed than on the passionate, rousing chorus of “Vultures”.

“Vultures” could potentially be my highlight of the record, but I would feel remiss if I didn’t shine a bit more light on the two bookending tracks. The title track has such a grand charm to it, from the wistful introductory music, through the lush guitar leads and the quintessential modern Soilwork up-tempo roll that makes up the meat of the song. On the flip side, “On The Wings...” hits hard in the chorus with Strid’s half-sung/half-screamed forceful vocals, keeps things fresh across its various twists and turns, and closes in style with a dramatic concluding reprise of its chorus. These three songs in particular are fine examples of what Soilwork are capable of delivering in their current extended renaissance, and what they’re capable has the capacity to be more gripping than the retro-revivalism other Swedish melodeath bands are opting for.

Written on 25.08.2022 by
musclassia
Hey chief let's talk why not
More reviews by musclassia ››