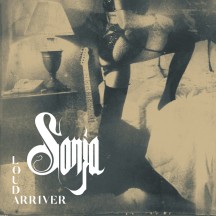 Some of you may remember Melissa Moore from her time in Absu as Vis Crom between 2009 and 2018, though she's been part of bands as far back as 1995. But the end of her collaboration with Absu seemed to weirdly coincide with her coming out as transgender, so while Absu has shifted into Proscriptor McGovern's Apsû, continuing in pretty much the same blackened thrash vein, Melissa Moore gave birth to Sonja, a beast of a completely different shape. Though Sonja seems to have been formed a bit earlier than Moore's departure, which would explain the difference in sound, but it is the kind of thing that does feel at least a bit retrospectively informed by the context of its main member.

The sound of this is quite on the border between heavy metal and hard rock, thus it had quite an obvious retro touch, feeling like a lot of the old music that felt more metal within its context rather than for its own heaviness. Add to that a very obvious glam and goth tinge and you have yourself quite a... sexually charged album. Not like the album cover and album title didn't make that very obvious. Hence why I said that it's context does make it a pretty strong affirmation aside from its purely musical standing. And considering how this brand of heavy metal is especially fit for androgynous vocals, it makes perfect sense why it would be the niche to go to for Moore's vocals. The vocals themselves I see as being the biggest point of contention for listeners (something that ironically seems to affect the metal genre with the most conventional vocals), since Moore's vocals are neither especially grating nor monotonous, though there are moments where I can see why they'd be seen (heard?) as such, especially because of the unnecessarily huge amount of reverb added on top of it.

Musically, the trio manage to make some neatly catchy melodies, giving the sound a rawness that doesn't necessarily just translate to heaviness. Given the experience of the other two members in bands like Woe and Tombs, the transition to melodic heavy metal went pretty smoothly. Context aside, this fits pretty neatly in the new wave of heavy metal resurgence that has been happening the past decade, from bands like Cauldron and Spell to the similarly gothic tinged Idle Hands/Unto Others. Yet Sonja still carves a further niche by the very specific way that glam and goth mix on this album, something helped by the incredible guitar licks on this record.

Therefore, I agree, this arrived pretty loudly. Maybe next time with a bit less reverb.