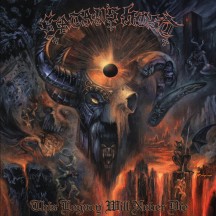 
Nowadays, few bands could willfully disregard the divisions between power metal and black metal, but for bands that were around to witness the birth of both genres, those divisions are merely a matter of arbitrary semantics. For a good 40 years now, give or take, Satan's Host have walked a line not often recognized – I’m not even sure which legacy they’re talking about.

Satan's Host debuted in 1986 with Metal From Hell, a volatile work of cackling mayhem that remains difficult to classify; abetted by street-level production and chaotic performances, it shakes down Iron Maiden’s early recordings for their most evil riffs and perverts them into thrash, sitting alongside the classics of black metal’s inchoate first wave. Simultaneously, it is bold, melodic, and unwittingly humorous to the point that it stands as a classic of US power metal, a mix between Manowar and Kreator. The context for each side of this sound has evolved dramatically in the years since Metal From Hell dropped, but despite struggling through one decade-long hiatus and a temporary change of vocalists, Satan's Host has remained consistent in its defiance of comfortable classification, and in an era where genre tags are applied liberally and hastily, it’s nice to see that some grey still exists on the border between metal’s lighter and darker shades; that’s where a band like this can ply its anachronistic trade.

These days, Satan's Host might best be compared to Howling Sycamore or Charred Walls Of The Damned, for one of its defining qualities is the utilization of clean vocals in an extreme metal context where nought but harsh vocals are typically heard. Vocalist Harry Conklin, better known for his work with US power titan Jag Panzer, is one of the best possible choices to bridge the gap; like Ripper Owens, Warrel Dane, Matt Barlow, and other vocalists pushing operatic styles over harsh and technical instrumentation, Conklin exudes pure venom with his piercing screams, possessing an unwavering edge in his delivery that complements the heaviest digressions of his bandmates. His theatrical and heavily articulated bellowing makes him a stout presence at centerstage. The band does recognize a potential square peg/round hole issue with relying too frequently on cleans over blastbeats, so Conklin goes the extra mile with smatterings of harsh backing vocals (and even occasional leads, as on “Shadow's Blood”); this seems to be the best possible arrangement for Satan's Host, determinedly maintaining the tether to traditional metal while acknowledging that sometimes nothing works better for tremolo-picked riffing than demonic growls.

Lying beneath those impeccable vocals is an ugly, bubbling swamp of indiscriminate stylistic blends, the true fan-filtering element that makes Satan's Host as challenging as it is unique. The band typically operates in a first-wave black metal mindset reminiscent of Mercyful Fate's Halloween-ish antics, wrapping the raw tempest of gutter thrash and the tinny delights of amateur NWOBHM in layers of traditional heavy/doom melodies, but the influences of second-wave black metal and old-school death metal are palpable. It’s an endless progression through classically minimal epic doom riffs and overactive percussion, then tremolo-picked thrash riffs slipping into sludgy breakdowns, then full-bore symphonic black metal, then bold and operatic clean choruses, then the crawling menace of cavernous death; songs like "Minuet – Vampyre En Amor" bear the scent of gothic finery, while "Warcry" is a pretty crusty death-influenced tune. "Shadow's Blood" illustrates the full breadth of successes and failures that the band encounters in trying to cover so much ground: the guitar leads and brief breakdown feel empty due to the lack of dynamics and the shortcomings of the production, which render the bass and percussion a dull thump, but there are fantastic epic-atmospheric passages and some of Conklin's most diverse and imperious vocal lines to date.

As practiced as Satan's Host is at crossing the streams, I don’t think that they have ever managed a seamless integration of all the different elements they pursue – the closest they’ve come is probably 2011’s By The Hands Of The Devil, and their production has taken a steady decline since that milestone. This Legacy Will Never Die has a more disjointed sound than the band’s last streak of albums, suffering from some sloppy performances and timing discrepancies, and the lack of cohesion combined with the unbalanced production is likely what makes it potentially unpalatable to new listeners even more so than the uncommon intersection of styles. Personally, I find the grotesque feeling inexplicably charming – it sounds consistent with the band’s ancient recordings of the ‘80s while also cultivating some black metal cred, and the filthiness of the album’s low end puts me in mind of OSDM’s gnarliest grooves. The resemblance to Incantation isn’t that strong if you play them side by side, but Satan's Host sounds closer to them or to Immolation or Bloodbath than to Sonata Arctica, or even another “dark” power metal band like Iced Earth.

This Legacy Will Never Die is not Satan's Host's most complete or consistent album, and it can be a bit difficult figuring out how to receive this wicked wheel of cheese. But the last few years have seen a solid array of bands like Nite, Hjelvik, and Slægt trying to work out how to combine traditional heavy metal with more extreme offshoots, so it seems to me that there is a growing interest in what Satan's Host purvey, and Satan's Host predates all of them, even older precedents like Darkthrone, Wizzard, I, and Windwalker. Hell, they’re one of the USA’s oldest metal bands still in existence, full stop – they might be rough around the edges, but they’ve got something worth keeping alive for 45 years. If you’re looking for a more blackened Nevermore or a more Iron Maiden-y Celtic Frost, this band should be your first stop.